My Roommate Romeo by Billie Bloom 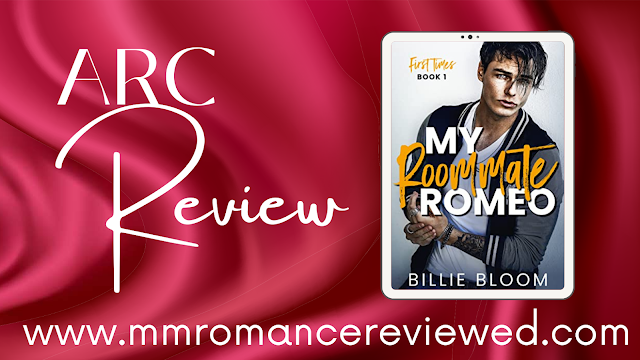 Billie Bloom proved with her last series that she could write college/new adult romance with her first series, The Bromance Chronicles, and she's done it again with My Roommate Romeo, the first book in her new First Times series.
From the blurb: 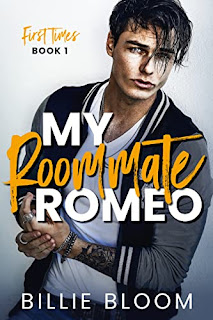 Putting solo videos online was the perfect solution to Hudson’s need to be seen problem. That is, until his new roommate Dayton found the videos.
But now Hudson thinks he might want Dayton to watch… live and in person.
Dayton’s game. He’ll master the art of not blinking if Hudson needs an audience.
But this plan has ‘terrible idea’ written all over it…
Heather's Review:
This is a sweet romance with a fair amount of heat, featuring a bi-awakening, guys who became teenage step-brothers and a kink for being watched while playing solo...
Featuring two college seniors, one out and one discovering what has been simmering below the surface for years...a roommate situation and some family drama, My Roommate Romeo was a fairly quick, low angst read that includes just enough hockey to know that Dayton has a bubble butt... and Hudson has a history with a hockey player...
The boys have heat, chemistry and the story moves quickly and easily.  If you enjoy new adult mm romance, you'll enjoy My Roommate Romeo!
Rating: 4.5 Stars
My Roommate Romeo is currently available in e-book and paperback and can be read as part of your Kindle Unlimited Subscription
4.5 stars 5 Stars ARC College Coming Out Heather KU low angst New Adult Series Sex Worker stepbrothers