on January 20, 2022
I am so excited to finally get Iris' story - we've been waiting since Pop Star to give him his HEA and now Eden Finley has not only given him a story, but she's amped up the storyline to include some serious missions....
From the Blurb: 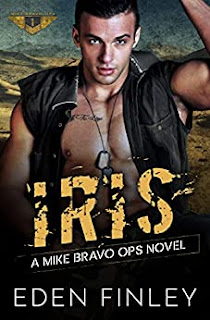 Mike Bravo. Knights in shining … camo.
Iris
I live for adrenaline. The thrill of the chase. And because I work for Mike Bravo, a private black-ops firm, it’s my job to go into dangerous situations.
But when we’re called in to extract a military team from a hostile situation, the thrill is so much better. Because one of those men happen to be the golden boy from my basic training days.
Brock “Saint” Harlow was a walking Captain America in the flesh. The perfect soldier.
Now my boss wants to recruit him, and I can’t wait to rub it in his face that he was rescued by me. The class clown.
I’m not called Iris “I require intense supervision” for nothing.
Saint
Military life is all I’ve known since I was born. I was raised to be a soldier.
But when a top-secret mission fails, I find myself suddenly discharged with nowhere to go.
Mike Bravo saved my life, and they want me to join them, but there’s one small problem.
Isaac “Iris” Griffin.
He’s as irresistibly snarky as he always was, only there’s a big difference this time. I’m no longer closeted or scared to live my truth. And the truth is, I’ve always wanted him.
It’s against Mike Bravo’s rules to fraternize with other team members, and I always follow orders.
But something tells me Iris might be worth the insubordination.
Heather's Review:
I love how Iris and Saint's history wove itself into this story.  I was a little worried when I started reading that the military actions would overshadow the romance, but I should have known that Eden Finley had a plan and as the arc of the story built, it was definitely about two men finding what they needed in each other, despite their history and current jobs.
I loved Iris in Pop Star - irreverent, cocky, but searching for something real and Eden Finley carried that through to his book... and Saint is just an amazing character and an amazing fit for Iris.
Whether you like military or paramilitary romance, or not, you'll want to read Iris for the love story - it's epic!  I do recommend reading Pop Star to get some background on Iris and the Mike Bravo team, but if you want to jump in here, you'll have no trouble keeping up with the story.
Rating: 5 Stars
Lindz' Review:
Iris gives the soldier he is saving, that is clinging to life one job…stay alive and don’t bleed out. Saint can’t believe of all the people to yank him from the god forsaken sandbox he thought he would die in it would be Iris. His long time frenemy from basic training that he might or might not have a thing for.
Eden Finley is hands down one of my favorite MM romance authors and I’m not just saying that. I own all her books in kindle and Audio format. Private sector security themed books for example Troubleshooters by Suzanne Brockmann are the kind of books that got me hooked on reading in high school. It was one of Brockmann’s books that introduced me to the world of MM romance. See how I just came full curly! So when those two things get combined I know it’s going to be magical for me to read. This book was like coming home even though it was something new because of the reason’s I just mentioned. Eden did a fantastic job researching to make the book as realistic as possible. Writing a book that is LGBTQ and has military parts mixed in is not an easy thing to do. Eden accomplished the task and did it well.
Iris is the playful jokester we all know and love. He keeps stressful situations light, tends to do questionable things and yet he’s the best at what he does. Saint is the perfect soldier and son, but he’s not. What you see on the outside isn’t often what is real on the inside and we find out saint isn’t who other thought he was real fast. The chemistry between these two is on fire. From the frenemy banter to the smoldering heat between them in the seats (or any one place they find to get it on) the decade that it took to get them together is explosive.
The other members of the Mike Bravo team are misfits in the best of way. They are the outcast’s of the military that have a family dynamic in a work place environment. Their unique personalities and skill’s combined with most of them being part of the LGBTQ community makes them a group of miss fits you can’t help but fall in love with. I can’t wait to read the next book in this series to see what the next adventure they all get to go on. Plus I’m looking forward to all the laugh out loud moments I know the next book will bring.
I highly suggest reading Pop Star:Famous Book 1 by Eden Finley to get more of a back story to the Mike Bravo team. It is a story about a pop start names Harley and Mike Bravo team member Bricks. That being said it is not necessary to do so as Eden does give enough information from that story to fill in the blanks in Iris.
Rating: 5 Stars
Check out the release blitz and enter the giveaway by clicking here
5 Stars Enemies to Lovers Found Family Heather Lindz Military