What Happens at Christmas- Misha Horn

on November 01, 2021
What Happens At Christmas is a fluffy story with a kinky discovery, unexpected attraction between stepbrothers, and alternative uses for random household items including a spatula and a pine branch!
Blurb: 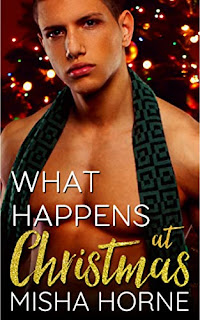 All I want for Christmas is my stepbrother.

Okay, maybe all I want for Christmas is to be my stepbrother. Brad is everything I'm not. Smart. Responsible. Acing college. The son my dad always wanted and the stepbrother I never did.

And as cute as he is annoying.

Meanwhile, I'm a college dropout with a dead end job, nosediving into bad decision after bad decision. I really don't need to make another one.

Too late, I guess.

That kiss in the basement? Mistake.
What we did with that wooden spoon in the kitchen? Mistake.
And that day hanging out at Santa's Village that should have been boring and corny but was somehow Christmas movie romantic? Huge mistake.

It turns out Brad isn't as perfect as I thought. He's actually kind of an adorable, irresistible mess who needs someone with a firm hand to take care of him. But I can barely take care of myself, so that person can't be me, right?

Too late, I guess.

**Please Note: What Happens At Christmas was originally published as Naughty AF. The title and cover have changed and a few scenes have been extended, but the story and ending remain the same. There's no need to repurchase if you've already read Brad and Rex's story!

If this is your first time meeting them, you can expect a warm, toasty, red hot MM Christmas romance stuffed full of festive fluff, accidental instalove, and lots of holiday spankings. One grump, one brat, one secret winter break hookup between stepbrothers that's all completely casual... until it's not.

What Happens At Christmas was sweet and fluffy but not very deep. Both Rex and Brad jumped in with both feet without much hesitation. The book is mostly focused on the kinky relationship between the stepbrothers. It would have been nice to see more of the relationship between Rex and his dad develop, it seemed strained through the story. The reader also doesn’t get to see the parents reaction to the news that the boys were in a relationship and moving in together.

Overall, it was an enjoyable read and a good amount of heat.

Storyline: 6/10 (not much story outside the relationship between the main characters)

Character development: 6/10 (each mc had a distinct voice, but there wasn’t any growth)