Joel Leslie has taken a favourite read and elevated it to a whole new status...

From the Charisma Check Blurb: 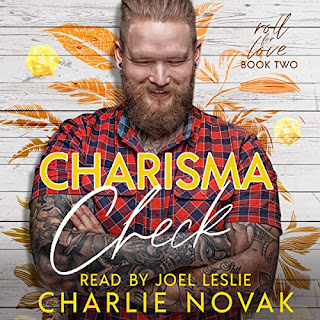 Hatred is complicated, clothing is simple — Edward doesn’t need a man, and he certainly doesn’t need cosplayer and tattoo artist, Izzy Montes, a.k.a. The Masked Gentleman, Edward’s ultimate nemesis.
Edward and Izzy have been antagonising each other for over three years. Their rivalry is fierce, and Edward is determined to keep Izzy at arm’s length. Which would be all well and good... if they weren’t engaging in a secret, heated hook-ups.
Forced to appear together at a film premier in LA, Edward is determined to get in and out with minimal damage to his reputation... and his heart. But Izzy Montes proves to be a complication Edward couldn’t have predicted. Biting, funny, and charming in equal measure, he’s the one man Edward needs to loathe.
He’s also the one man Edward can’t get out of his mind.
Not that Izzy plans on letting him.
Charisma Check is a 80,000-word contemporary MM romance featuring comic conventions, snark, many costume changes, and only one bed. It is book two in the Roll for Love series and should be listened to as part of the series.

I'd loved Charisma Check first time around in e-book format, with the banter between Edward and Izzy, in their mock enemies relationship, they are too good to be truly enemies and there was always a spark between them.

Joel Leslie does a fantastic job of elevating the story, adding a little more bite to their interactions and his Edward voice is just perfect. I don't think I'll re-read it without hearing him saying the words.

Plenty of spice since their relationship is based on a benefits without the friendship basis.

Edward is one of my favourite Charlie Novak characters for his love of wearing clothing against gender convention and his love of toys.

You can even listen to a short sample of Charisma Check audio on the Amazon page!

Rating: 5 Stars for both the book and the audio!