Censorship, reading MM romance and more on my personal journey to today

I've had quite the morning... I spent it posting and amplifying about a situation that an author I follow and like has found themselves in.... and it's sadly one that I hear more and more often... they've become a victim of censorship in a time where so many marginalized communities are facing increased censorship and the spotlight of being banned.

The universe has been putting hints in my way since the start of 2021 that I need to take a more active and activist role in promoting what I love, so I want to start by taking you on my journey to today while I contemplate what my future self looks like and then I'm going to take a walk.... (but more on that later)

Backing up to before the pandemic took hold, I started shifting my reading focus away from more traditional MF romance and erotica, first by diving into MFM and then MMF stories... and finally realizing that I didn't need the F at all - I wanted to read stories about men finding love...

So, in the last year I have read over 1000 books, and I can count on one hand the ones that were not M/M or poly stories featuring men finding love.  I joined amazing communities of readers on Facebook to find new authors and share my finds.  As I discovered more new authors, I started stalking them on their pages and in their groups, eventually friending many of them and joining their ARC teams.  I would dutifully review on Goodreads, Bookbub and Amazon and share my favourites within my communities.

Then 'Zon started interfering in my reviewing, sometimes holding reviews of books I'd read for up to a week at a time, so I decided to take my reviews into my own hands and draw on some old reviewing and blogging skills to form MM Romance Reviewed, a platform that I have chosen to make a safe place to promote all forms of M/M romance stories on my own timeline.  I did make the decision to put the blog behind an age wall, simply because the majority of what I read and review is for 18+ audiences and while I am happy to promote coming of age stories and other more YA style romance, my focus is on sharing stories to an adult audience.

Once I started blogging here at MM Romance Reviewed, I realized that to be successful, I needed to build community and find an audience - once again, I turned to Facebook, but also twitter and Instagram to connect with more like minded individuals.

Finding like minded reviewers - who have similar and divergent reading habits surrounding M/M Romance - the first to connect is my amazing blog partner Tammy B! She not only reads and reviews, but also Alpha and Beta reads in the genre.  She regularly reviews books that fall well outside my wheelhouse - particularly PNR!  And while she's amazing, it still wasn't enough - neither of us are audio book users (again no kink shaming, we just are traditional readers), and we still didn't have ABO, MPreg or other stories covered...

Tammy and I both put out a call for more reviewers and we are currently working with over 10 people who want to share their reviews on the blog... some, like Reds Book Reads have already posted multiple reviews with us and joined our permanent team, while others like Sarah C. and Laora have recently had their first reviews posted... including Laora having our first Audio Book review and Sarah C. reviewing our first YA/Coming of Age book.  And we look forward 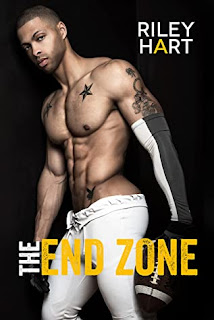 At the same time I was building the blog and delving further into creating my community, I noticed that several authors would continually run afoul of various platforms - Amazon, Patreon... censorship and not in isolation, but as a systematic and systemic community issue.  Authors I follow regularly seem to end up in violation of arbitrary and totally inconsistent rules that seem to be much more liberally applied to gay fiction than straight fiction and sometimes it borders on insanity the nitpicking and idiocy that is created against authors who are trying to follow the rules and also put out amazing work.

Heck, I experienced the censorship with my very first tiktok video because I dared include Riley Hart's The End Game cover (along with other shirtless men):

We joked about it on Facebook, but the very real issue of censorship stuck in my head.  I appealed and was granted the right to show my video again, but since we're talking about building awareness.. it's a step...

Around the same time, a writer I follow and one-click buy from, K.C. Wells posted that her new book was facing backlash from various sources because of it's steamy cover: 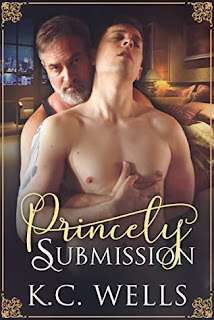 As soon as I had a break from reading ARCs, I of course did what any good reader did and devoured the book, put up my review and started promoting the book to my socials to help boost it since the author couldn't use traditional methods.
What happened next put the next kink in my road... K.C. Wells was interviewed on a podcast, because not only is the cover of Princely Submission hot, it features a real life couple who host a podcast called Watts The Safeword and K.C. was invited on to talk about Princely Submission and how she writes her books, so I clicked on the link and listened to the podcast!
I loved the humour and the positivity vibes I got from Amp and Mr. Kristofer, so I added their socials to my follows and went back to reading...
A few weeks later, as the Only Fans sex ban and censorship of sex work took off trending on Twitter, I found myself once again drawn to the information that was being disseminated by Watts the Safeword and Amp specifically and I was drawn into their realm again... plus they both post some amazing NSFW images on their socials (oops off track and another story).  I appreciated Amp's thorough analysis of the situation and the way he combined his own personal story with solid research to share what they were doing... and it lead me to want to listen to/watch more of their podcasts/ youtubes and heck, I even joined twitch to watch banter and chatting (I don't stay for the gaming - really not my thing).
I shared info with my community, ironically reviewed a book written about a sex worker using an only fans type platform, (Your Only Fan review here), did more research and waited to see what was next... and then Only Fans reversed it's decision and my access to the conversation became more limited - so I continued to check in on Watts the Safeword and it's platforms to learn more, laugh a little and hopefully glean more information...
Back to censorship...
Another author that I read and recommend regularly started running afoul of censorship over another kinky m/m book I reviewed and love!  K.D. Ryan's It's Paradise, Baby was first censored and put in the erotica dungeon and then outright banned by Amazon - allegedly over this cover: 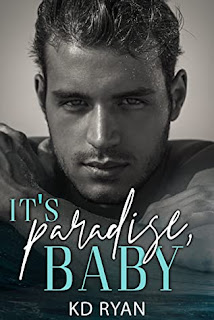 The review is now updated with direct from the author buy links, so please support!  But the author had put all their eggs in the Amazon basket because they felt that KU would be a great way to be found by readers... (and honestly I have found a number of authors that way), but it raises the monopoly issue again... where similar to Only Fans, people are relying on a giant corporation to promote their work and make a living.
I hopped on the computer and spent the morning bringing social media attention to KD's plight - updating the blog post with direct buy links, making a tiktok to promote the book and the disgrace of the outright censorship...
then I was tired... and I wanted a laugh, and I found a link waiting for me in twitter from Pup Amp... they had a new podcast up... I figured it would be funny, and it had it's moments... but it was profound and it has caused a shift in me I didn't know I needed... and still don't know where things will fall, but three things have come from my experience listening to their conversation with the Bathhouse Mystic - this stream of consciousness post that is probably going to go in the tl;dr category and a walk around the block to clear my mind and connect with my 5 senses...
I've also put the request out to the social universe to share censorship and other roadblock stories from my author and reader friends in the M/M community for a series I'm going to write for the blog as a jumping off point for what's next...
I w