Release Blitz & Giveaway - The Devil You Know by S.J. Coles 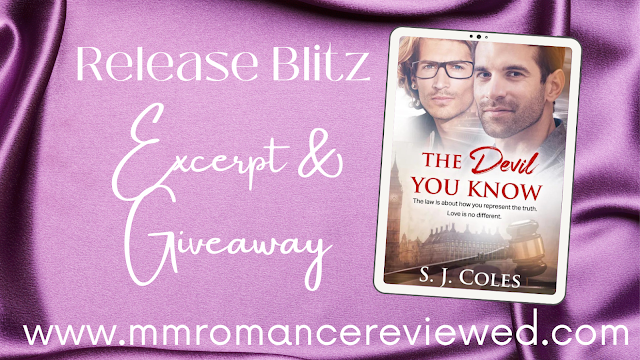 Book Title: The Devil You Know

The law is about how you choose to represent the truth. Love is no different.

Hilary Whyte believes that he has left his teenage troubles—and the person who embodied them—in the past. He has spent a decade building his career as a defense solicitor, believing that despite his troubled past, even the worst human beings deserve justice.

Now he has a promotion on the horizon as well as a fairytale wedding to his film star fiancé. On paper, life couldn’t be better.

But now he is being made to represent Dom Gosford, the boy who made his adolescence a living hell, on a double murder charge, and Hilary can’t be sure he is innocent. As the trial approaches, the two men are forced to travel a road of discovery, only to find that the truth of their connection goes much deeper than the question of who killed Lizzie and Dean Wood.

Dominic finally turned around. Hilary had told himself many times in the last few weeks that he’d forgotten what this man looked like—that he’d successfully wiped the image from his mind, along with the sound of his voice. But as he took in the eyes, blacker than midnight, the hard, almost cruel set to a jaw that would otherwise be considered handsome, it was like Hilary was again sprawled on the PE changing room floor, that same face hanging over his, bloodied lips twisted and mocking, his fist raised for another blow.

“So, it really is you.” Dominic didn’t speak loudly, but it was like a stone had dropped into the silence of the room. “I could have laid a considerable amount of money on never seeing you again.”

“Well, I guess we would have both lost that wager. Shall we?” Hilary said, indicating the sofas and coffee.

“I’m good,” Dominic said, lifting his glass. “You help yourself.”

Hilary sat, ignoring the coffee, even though his veins were clamoring for caffeine. Fear that the coffee pot would shake in his grip was too real. Instead, he opened his briefcase and began laying the paperwork out on the narrow glass table. “It probably would have been better to meet at the office for this—”

“Too many flapping ears,” Dominic said. “My mother-in-law has some trust issues, to say the least.”

“We can manage here if you’re more comfortable. But just so you know,” he said, pulling a device out of his case and laying it on the coffee table, “I’ll be recording every session.”

“Still have trust issues of your own, I see.”

“So,” Hilary said, switching the recorder on, not meeting Dominic’s eye, “I’m up to speed on all the known facts of this case. This meeting is for me to get to know your side of the story in more detail and to help you prepare for what happens next.”

Dominic gazed at him thoughtfully. “I’ve been trying to remember… What was it we called you? In school?”

Hilary took a moment to steady his voice. “Let’s get one thing straight right from the start, Mr. Hart-Gosford,” he said levelly. “Our personal connection is one of the reasons why Walter Gunnerson wanted me to represent you. But all he knows is that we both attended St. Edmund’s.”

Dominic lifted his fine, black eyebrows. “If the good Mr. Gunnerson knew the truth, he might wonder why you agreed to take this case at all…as I do.”

Hilary looked him in the eye. “I’m capable of not allowing the past to affect my judgment. But if you insist on bringing it up, it will become a problem. Understand?”

He sipped his drink. “I understand.”

S.J. Coles is a Romance writer originally from Shropshire, UK. She has been writing stories for as long as she has been able to read them. Her biggest passion is exploring narratives through character relationships.

She finds writing LGBT/paranormal romance provides many unique and fulfilling opportunities to explore many (often neglected or under-represented) aspects of human experience, expectation, emotion and sexuality.

a $50 First For Romance voucher

Click on the graphic below to be taken to our reviews: 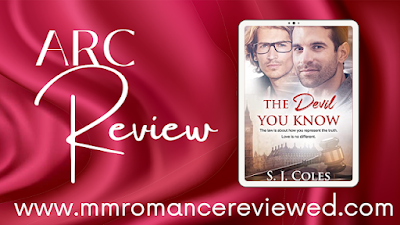