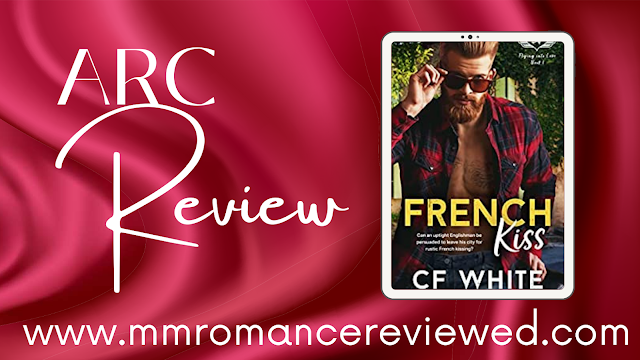 French Kiss is the first book in the Flying into Love series and it's off to a flying start...
From the blurb: 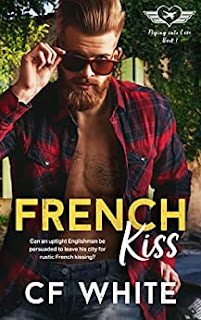 Can a French kiss persuade an uptight Englishman to leave his city behind and start a new life in rural France?
Clean-cut London businessman Dale Calverley doesn’t do relationships.
Rugged French handyman Valentin Aubrey doesn’t do city men.
When Dale hires Valentin to help him fix up his inherited farmhouse estate in rural France and sell to the highest bidder, sparks fly.
Complete opposites, can they really expect their insta-lust to last beyond the storm that forces them together?
But how can Dale walk away from a man so alluringly rogue as Valentin Aubrey?
And how can Valentin expect a man so money-orientated to throw away his career and stay in the wilderness with him?
French Kiss (Flying into Love #1) is a Contemporary, Opposites Attract, Age-Gap, Forced Proximity MM Romance featuring an uptight English businessman with a preference for nameless hook ups and a rugged half-French handyman with a chequered past.

He’d go back to his work. He’d go back to being able to dial a release. And he’d bury away feelings for another man. The way he’d been doing for years.' - Dale "Can I just start of with saying that I loves this new book by C.F. white and the start of a new series. I enjoyed the dynamic between the mc's, it is a fast developing attraction due to being forced to stay in the same house

Dale and Valentin are  well crafted characters who seemed to be opposites but really to me, they are two men who have been damaged in their youth and have become persons that have a hard time to truly connect and be open and handle that in completely different ways.

French Kiss is a contemporary mm romance, with French sentences and words, in there with a bit of a hick-up in the relationship but with a hea after especially Dale comes to his senses.

I love how CF White dropped Dale into his new habitat naked and just a bit afraid, unable to access the outside world... and that Val was there to greet him... and even though the sparks were there, the book managed to have tension and a slow burn.

French Kiss is the epitome of forced proximity and opposites attract and just an awesome read.   The characters were real and really interesting. This book has a great push/pull and a hefty dose of humour to go with some poignant moments...  all around a great read!