What happens when hockey rivalry turns to hate and then you throw passion into the mix?  If you want to find out than Open Ice Hit is probably a book for you! 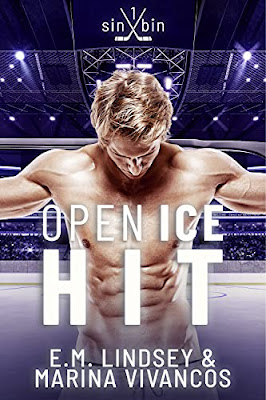 Vicki and Tommy aren't just enemies on the ice—they're explosive off it too...in more ways than one.

Noah Viklund doesn’t play hockey in order to make friends. That’s not what the game means to him. And he especially can’t stand the Sea Dog’s new rookie, Tommy Tremblay. After all, Tommy’s the sort of player that gets under Vicki's skin.

And he won’t take anything seriously.

But when a chance meeting during the offseason shows Vicki what a good boy Tommy can be for him, it becomes increasingly difficult to keep seeing him as the bad guy. After all, how can he hate the only man who has ever made him feel worthy?

Tommy is tired of Vicki’s stuck-up, holier-than-thou attitude. He’s fought hard to get where he is, and he’s not going to let some tightly wound guy make him feel like he doesn’t deserve his hard-won success.

So, he can’t explain why they keep falling into bed together, or why he’s starting to fall for the man he’s supposed to hate.

They both know this shouldn’t work, but the more they try to push each other away, the more their souls seem to connect. The question is, will they find a way for their hearts to be vulnerable and let love in?

Open Ice Hit is a steamy MM romance set between the fictional NHL teams of the Brooklyn Phantoms and the Queens Sea Dogs. It contains hate that might not quite be hate, team as found family, sick goals from soft hands, some really stinky marine animals, praise kink a mile wide, and an unexpected journey that might just be worth taking.

I love hockey romance, I really love sports romance that doesn’t use homophobia as a reason the MCs can’t be together.  I very much loved that gay hockey players wasn’t a concern for anyone in this story.

Enemies to lovers isn’t usually something I read/enjoy and there were spots in this one I didn’t enjoy for that reason.  The way Noah (Vicki) treated Tommy after their first couple hookups as an example. But I enjoyed this book even in spite of that.  I enjoy both these authors’ books individually and am happy to report that their joint writing is just as skilled.

There were some spots I wanted to smack Noah for hurting Tommy, but his reasoning and back story eventually shed light on his actions and they got their HEA.  By the time the book was over their love was well earned.

Heat: 8/10 (lots of hot hate sex, pin-him-against-the-wall-and-devour-each-other in the beginning, that turned softer and kinder later)

Storyline: 8/10 (personal preference as enemies to lovers isn’t my thing, but I’d highly recommend it if it’s yours, and I still really enjoyed the book)

I also read the pre-novella, Between the Pipes, about Kevin, Davesh, and Zed.  It was good for a novella, but I wish it had actually been the first full length book in the series.  I would have LOVED to see more development between these three.  Couples who find their third is a weakness of mine.  I still enjoyed it, but definitely wanted more.

I've often read rivals to lovers in sports books, but rarely find the level of hate where Vicky is at when the book opens.   The sex is rough, controlling and dominant, but the relationship is non-existent.   This book follows the steam, the snark and the sniping through the middle of the book and then the tone changes as their relationship grows and evolves...

I like the journey that the authors take us on - from passion alone, to something more.  I think that the world building was good and I felt like I was in the story most of the time, although I did have a little bit of trouble following the timelines in a few places and it took me out of the book a little bit.

Open Ice Hit was a solid read and a good addition to the world of enemies to lovers sports stories.  Whether you're a hockey novel fan or just into the enemies to lovers trope, I think you'll enjoy Open Ice Hit.   I have not read Between the Pipes yet, and followed the story easily, however the characters from Between the Pipes do appear frequently in this story, so you may want to grab it first because free...