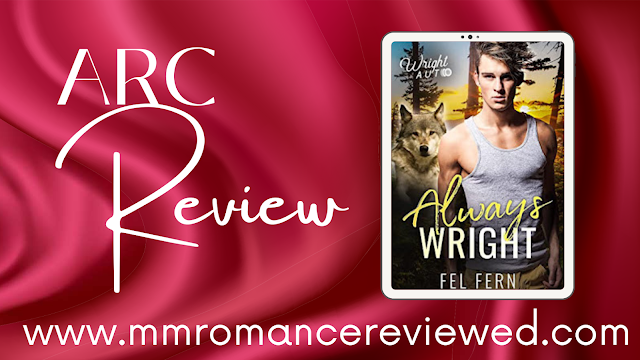 He was bold, gorgeous and wasn’t afraid to speak his mind. There was no playing games with Wyatt.
From the Always Wright blurb:
A conflicted biker bear. A wolf without a mate. Can Mayhem and Wyatt cross the boundaries of friendship and become something more? 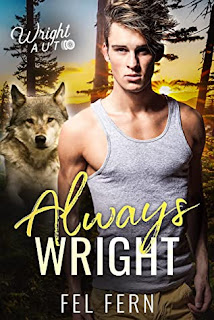 Omega wolf shifter Wyatt Wright has pined for Mayhem for what feels like forever. He’s watched Mayhem fall in and out of love more times than he can count. Now it’s Wyatt’s turn and he can’t screw this chance up. Wyatt’s been warned by his brothers to be careful. Mayhem’s a wild card. Wyatt might end up getting tangled in Mayhem’s MC problems but he doesn’t care. He’s determined to become Mayhem’s forever mate no matter what.
Alpha bear shifter Mayhem knows Wyatt was meant to be his, but Wyatt’s too good for the likes of him. That’s why he’s kept his distance all this time. Friendship should be enough but what if Mayhem starts wanting more? What if the mate he’s been searching for his entire life, is standing right in front of him? But claiming Wyatt right now is risky, especially with an unknown enemy gunning for him and his MC.
Can Mayhem win Wyatt over and save his MC family at the same time?
Always Wright is a Mpreg shifter romance and the second book in the Wright Auto series. It features a hopeful wolf shifter and a grumpy teddy bear who can’t seem to stay away.
Laora's Review:
Always Wright is a great second book in the Wright auto series. The author gave me all the emotion needed to connect with both Wyatt as a strong wolf omega and Mayhem an alpha  grizzly bear who learns love is possible for him. This was a great follow up of the second book and it ofcourse has mpreg and a hea, after some angst.
Rating: 5 Stars
Always Wright is currently available as an e-book and can be read as part of your Kindle Unlimited Subscription
5 Stars ARC KU Laora MC MPreg Paranormal Series Wolf