Discover how Luca and his sexy Canuck, David, met in this 40k word prequel novella to the Foxxxy Gentlemen's Club series.
From the blurb:
Foxxxy Golden Rule: Foxxxy is family. 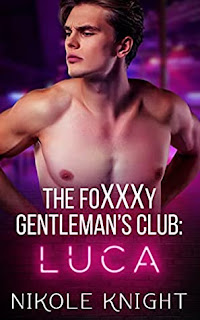 When Luca’s life in Boston falls apart, he must leave behind his home, his job, and his chosen family—the feisty dancers of the Foxxxy Gentlemen’s Club. But his trip takes an unexpected turn when a blizzard careens him off the road and into the home of David, a Canadian silver fox who is every one of Luca’s lumberjack fantasies come to life.
It’s been three years since David’s divorce, and while he’s content with his remote, rural life, he feels there’s something missing. He doesn’t know what that something is until a captivating, young dancer crashes his car outside his cabin in the middle of a snowstorm and reminds David that there is more to life than simply existing.
Neither Luca nor David planned for this detour, but they only have to survive two days together in close quarters. How hard could it be? It’s not like forty-eight hours is long enough to fall in love. Or is it?
Discover how Luca and his sexy Canuck, David, met in this 40k word prequel novella to the Foxxxy series.
Tatted_book_freak's Review:
𝙄𝙩 𝙝𝙖𝙙 𝙡𝙞𝙩𝙚𝙧𝙖𝙡𝙡𝙮 𝙗𝙚𝙚𝙣 𝙢𝙮 𝙟𝙤𝙗 𝙩𝙤 𝙥𝙪𝙩 𝙗𝙧𝙤𝙠𝙚𝙣 𝙥𝙚𝙤𝙥𝙡𝙚 𝙗𝙖𝙘𝙠 𝙩𝙤𝙜𝙚𝙩𝙝𝙚𝙧.
What an exciting adventure with how Luca and David began! The enthusiasm of Luca, mixed with the knowledge of David, they were a perfect fit right from the start. Luca is feisty and humorous with his joke full demeanor, while David is a recluse, divorced Mountie. Their journey was so much fun and exciting to read!
“𝐈𝐭’𝐬 𝐭𝐡𝐞 𝐛𝐫𝐚𝐢𝐧 𝐝𝐚𝐦𝐚𝐠𝐞 𝐢𝐧𝐝𝐮𝐜𝐞𝐝 𝐟𝐥𝐢𝐫𝐭𝐢𝐧𝐠.”
These two had an obvious connection right away, even though they both tried to initially fight it. They were made for one another, complimented each other. And, their chemistry was exploding from their pores!  Their smut scenes left me wanting more from their intensity, and their pieces just fit together perfectly.
“𝐘𝐨𝐮 𝐤𝐧𝐨𝐰 𝐈 𝐝𝐨𝐧’𝐭 𝐧𝐞𝐞𝐝 𝐚 𝐡𝐞𝐚𝐝 𝐢𝐧𝐣𝐮𝐫𝐲 𝐭𝐨 𝐟𝐚𝐥𝐥 𝐡𝐞𝐚𝐝 𝐨𝐯𝐞𝐫 𝐚𝐬𝐬 𝐟𝐨𝐫 𝐲𝐨𝐮, 𝐫𝐢𝐠𝐡𝐭?”
I am so excited for Sasha’s story next! Nikole’s story just hit right away and stay there for months after. You can literally feel her emotions through the pages, leaving me with feelings of contentment.
“𝗙𝗶𝗻𝗲! 𝗜’𝗹𝗹 𝗯𝗲 𝗖𝗮𝗻𝗮𝗱𝗶𝗮𝗻 𝗳𝗼𝗿 𝘆𝗼𝘂.”
Rating: 5 Stars
Heather's Review:
When I first read Christian's Story in Foxxxy Gentlemen Book 1 a few months ago, I had a vague knowledge that I'd read Luca and David's story, but couldn't place it... so when the ARC for Luca came around, I finally figured it out - I had grabbed A Little Lost in the January 2021 prolific works giveaway and really enjoyed it... but it was so long between then and my read of Christian that I didn't put them together!
Reading Luca was like coming home... because it takes place at the same time as Christian and Angel, now was the perfect time to re-read it and connect Luca's adventure with the Foxxxy Boys...
Luca's story has everything I love - forced proximity, size difference, age gap and of course steam!  It can be read standalone, but I think it's best read as part of your Foxxxy Gentlemen's Club journey!
Rating: 5 Stars
Janet's Review:
Luca is well written with that perfect pacing that ends so smoothy you finished before you realize it.
We’ve had hints at Luca in the previous stories in this story. Luca and David have fantastic chemistry!! I loved their beginning.
Sassy Luca crashed his car and is stranded. He meets David who is somewhat a recluse.
Their story had my favorite troupes, age-gap, forced proximity and size difference not to mention the sassiness of Luca. My only wish that it was longer!!
Overall, a fantastic and fun read!!
Rating: 5 Stars
Luca is currently available as an e-book and can be read as part of your Kindle Unlimited Subscription
5 Stars Age Gap ARC Contemporary Forced Proximity Heather Hurt/Comfort Janet KU novella prequel Series steamy tatted_book_freak