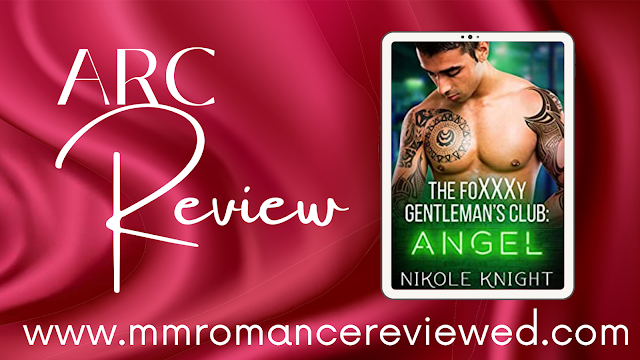 Angel continues the story of Nikole Knight's amazing FoXXXy Boys...
From the blurb: 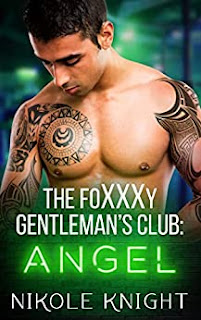 Foxxxy Rule #2: Don’t mix business with pleasure
Life has not been kind to Adrian Vasquez. He spends his days hiding the truth of his sexuality from his homophobic brother, sticking to every rule of his probation so he isn’t sent back to jail, and keeping out of the crosshairs of Los Hermanos del Diablo—Boston’s most notorious Mexican gang, of which his brother is a prominent member—all in the name of survival. Thankfully, he has his nights working at The Foxxxy Gentlemen’s Club as an escort and exotic dancer to keep him sane. It may not be his dream job, but under the neon glow of the Foxxxy stage, Adrian can pretend to be someone else, even if it’s only for a little while.
Life has not been easy for Taylor Greer. Born queer and intersex to a Southern Baptist preacher, they left home at fifteen to escape conversation therapy, masquerading as a “Christian summer camp.” After surviving four years on the unforgiving streets of Boston, they struggle to get their life back on track for a chance at a better future. Working two jobs to stay afloat and studying every spare minute to pass their GED exam, Taylor has little time for a social life, let alone a love life. But who needs romance when living is this complicated?
When Taylor and Adrian’s paths meet with a literal crash, a bruised plantain is the catalyst for a connection they’re both starving for. Dating a coworker never ends well, but some forces cannot be fought, and Adrian and Taylor can only ignore the magnetic pull between them for so long before physics wins.
Adrian knows better than to mix business with pleasure. Taylor knows better than to get involved with a colleague. But the heart wants what the heart wants, and some rules are made to be broken.
Every book in the Foxxxy series can be read as a standalone, but they are best enjoyed when read in order.
*Trigger Warning: Racist and homophobic language/slurs, Mild gang-related violence and threats, Scenes and discussions about eating disorders, Scenarios and mentions of gender dysphoria, One non-violent but bigoted/racist exchange with the police.
Heather's Review:
Once again, Nikole Knight brings us amazingly unique, but relatable characters in her next FoXXXy Gentlemen's Club offering, Angel.  While this book can be read standalone, it is truly intertwined with Christian's story and takes place in the same timeline, so I think you'll enjoy it more with the background knowledge from the first book - which has many scenes from this story, but viewed from Chrissy's unique perspective...
Taylor and Adrian are both absolutely sweet, wonderful characters.  I love Taylor's compersion and understanding.  I love Adrian's protectiveness and carefulness.  Both characters draw you into their world and hold your interest as they develop their relationship together and learn new things about each other in a way that the reader unlocks the knowledge at the same time as their partner, after speculating what things mean...
I also love how much of a role the Gentlemen continue to play in the series and can't wait until they all find their HEA!
Rating: 5 Stars
Angel is currently available in e-book and paperback and can be read as part of your Kindle Unlimited Subscription
5 Stars Demi-sexual Heather Intersex KU Sex Worker sweet Trigger Warning