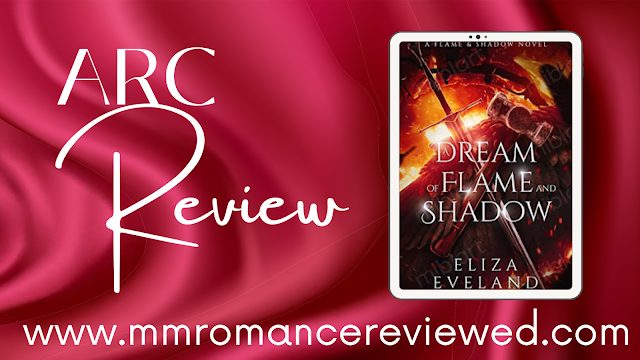 Janet calls fantasy novel, A Dream of Flame and Shadow, "epic!!"
From the blurb:
A blacksmith unable to forge a future. 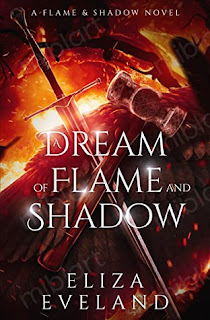 Every time Nevahn closes his eyes, he is haunted by nightmares of fire and blood. Though he’ll take any distraction he can find, his favorite is his daily work at the forge, where he is the master of fire. But he’s been an apprentice too long, and his nightmares are holding him back.
Then a failed bargain sends him to the Land of Nightmares, where he must live for a year and a day. Nevahn’s terrifying new host is not just any Nightmare, but Lord Cian, the Lord of Nightmares himself.
As he adjusts to his new home, Nevahn finds his feelings for the realm of Nightmares, and its master, shifting in unexpected ways. Though he’s been warned against falling for the brutal yet charming lord, Nevahn can’t help himself.
But this courtship is dangerous, and Nevahn must steel his heart against it, or risk being burned in ways that may never heal.
A Nightmare with a dream.
Lord Cian is the warden of the world’s most secure prison, housing ancient Terrors locked away by the gods. But he’s inherited another problem. Every year, as payment for his ancestors’ part in helping mankind steal fire from the gods, the Fire Lord demands a blood tithe.
Cian dreams of a world where his people no longer bleed for past sins, but that means challenging the Fire Lord, and all-out war. A war Cian knows he can’t win. He’s tried before, and knows all too well the price of defying the Fire Lord.
Cian’s feelings for Nevahn only further complicate things.
With his attention divided, and war looming, Cian may have to choose between what his heart wants, and what duty demands.
The coming war could destroy more than Nevahn and Cian’s fledgling romance. If they lose, both their worlds could fall to the Fire Lord’s wrath.
A Dream of Flame and Shadow is an epic romantic fantasy novel featuring a romance between two male characters. Swords will cross in more ways than one. This reimagining of Irish and Greek myth is a compelling and sizzling story perfect for fans of Sarah J. Maas and Jennifer Armentrout.
Janet's Review:
A Dream of Flame and Shadow was an amazing read! A fantastic fantasy. The premise and world building were fantastic!
Nevahn is a blacksmith apprentice that has nightmares every night. A failed bargain send him to the Land of Nightmares and Lord Cian, the Lord of Nightmare himself.
This story was easily demolished, I couldn’t stop reading it! I was so invested in it. I loved everything about it!
Overall, a phenomenal read that is well written with fantastic pacing. It was over before I knew it and I definitely want more in this world the author has created.
Rating: 5 Stars
A Dream of Flame and Shadow is currently available in e-book and paperback and can be read as part of your Kindle Unlimited Subscription
5 Stars ARC Fantasy Janet KU magic mythology Series