An unusual shifter pairing and some darker elements make Tails an interesting read after My Fae Mate, Book 1 in the Misfits of Mistvale series.
From the blurb: 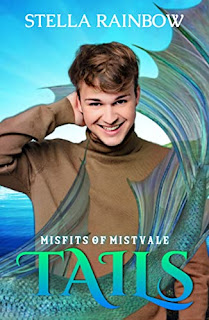 Jules escaped a past he'd rather forget. Firey has spent years looking for his destiny.
Jules
Three years ago, I escaped a horror I still have nightmares about. When I ended up in Mistvale, I knew I'd found a safe haven.
Now, I have a successful business, and I'm slowly starting to trust people again. There's just one thing missing: the shy, cute dolphin who has been tailing me for the past month.
Who is he, and what does he want from me?
Firey
My mate is so beautiful. He's a merman-siren, someone so unique and gorgeous, while I'm just a simple dolphin shifter. I've been trying to get up the courage to talk to him, but I keep chickening out.
I know he knows I've been following him, but he hasn't approached me. Does he know I'm his mate? Maybe he doesn't want me either.
What will I need to do to show him I'm worthy of being his mate?
Look out for:
A shy dolphin shifter with a funky name, it's FIREY not FIERY, a half-merman half-siren pub owner, three am dips in the river, size difference, some stalking but it's the cute kind, meddling family members, babysitting, Firey becomes godfather, danger lurks in the shadows, underwater fun *wink*.
Tails is a 55k words gay romance starring a beautiful half-merman-half-siren, a shy dolphin shifter who just wants his mate to notice him, and all the usual Mistvale Clan meddling.
Tails is the second book in the Misfits of Mistvale series, and each book in this series can be read as a standalone.

Another great book in the Misfits series. I'd recommend reading book 1 at least for some of the background for this one.

Firey knows Jules is his mate but he's hung up on his best friend. I loved how this was done. There was a lot of communication and nothing happened between Firey and Jules until Firey had feeling for Jules only.

A little darker in tone than the author's usual books with Jules still suffering from the after effects of being kidnapped. There's still a lot of sweetness and some steamy scenes in Tails.