The Slow Death by Nic Starr and BL Maxwell 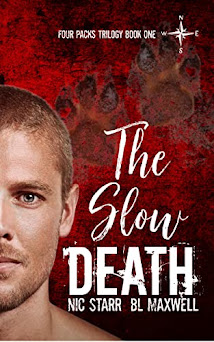 Caught in the fallout of a rare disease, and members of opposing packs, Zander and Marrok’s future as fated mates hangs in the balance.

Alexander Kingston wasn’t destined to lead the East Territory pack, but fate had other ideas. Becoming the next Alpha in his dead brother’s place and managing his father’s expectations is a challenge, one that’s only getting harder with time. When his father, the Alpha is reluctant to accept outside assistance when one of their own is afflicted with a deadly blood disorder, Zander must take a stand against his father or lose another pack member to The Slow Death.
Marrok Blain is part of the North Territory pack. With his unique knowledge of The Slow Death, the debilitating progressive disorder that slowly kills with every shift, he offers help, knowing he’ll be met with resistance from his friend’s pack. What he doesn’t expect is the overwhelming pull to the stubborn yet undeniably gorgeous son of the East Territory Alpha.
Four packs coexisting with rising tensions, and a genetic disorder that reminds them of the common thread that connects them all. Zander and Marrok are the key to an uneasy alliance, or all the packs will suffer. Especially Zander, who discovers he’s got one more deadly fight to face.
#ReluctantAlpha #FatedMates #Shifters #Supernatural #MMRomance #EnemiesToLovers

While it's a quick read, it easily kept me interested, which isn't always easy. The Slow Death is a nasty disease affecting shifters and Marrock is an expert in it , away from his pack studying the disease. He's desperate to save his childhood friend at any cost, more so because he sees the pack that his friend belongs to at fault for how quickly it has progressed. He and Zander, the pack alpha's son, don't exactly hit it off and I loved the antagonism there. There was fire between them, a grudging acceptance of their situation. They have a lot of chemistry and both characters were easy to like.
Hopefully not a standalone since it feels like the beginning of a series, but it leaves off with a strong HFN. Told in dual POV and is a medium/fast burn