on November 23, 2021
This was the Pendleton story I never knew I needed! Amazing and I loved every minute of it. What more could you want from a kinky Christmas story?
From the Preston's Christmas Escape Blurb: 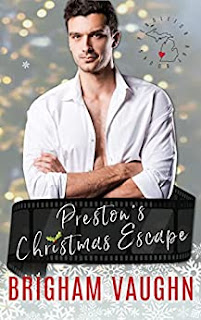 Actor Preston Graves’ Secret Exposed!
Preston Graves is a household name among the TV-watching masses. Handsome, accessible, relatable. But when his not-so-vanilla personal life goes public, he high-tails it back to his home state of Michigan for the holidays—to the man he once loved.
Blake Aldrich tried love, twice. When it didn’t work, he retreated to focus on his pottery. He finds success but he’s never forgotten what he lost. His lover. His best friend. Now Preston is back, invoking a childhood pact and dragging a Hollywood-sized mess into Blake’s tidy life.
The lure of Preston in Blake’s woodland retreat tempts him and the lacy surprises under his clothes are a present he can’t resist unwrapping. The heat between them ignites and their old feelings come rushing back, but Tinseltown is still calling Preston’s name.
Blake will have to choose whether to follow the man he’s always loved, or be left out in the cold.
Preston's Christmas Escape contains predicament play, lingerie, paparazzi, and a second chance at love. Although set in the Pendleton Bay world, this book can be read as a standalone story.
Red's Book Reads Review:
Blake and Preston were college roommates who became more. Both were left heartbroken when they split up, with Blake burying himself in his pottery work and Preston becoming a famous Hollywood actor. When a scandal causes Preston to flee LA to work out his next steps he ends up staying with Blake as he has nowhere else to turn to.
I adored how Blake and Preston slowly worked back to rekindling their relationship and how they managed to work things out even when they were so conflicted. It was great to have cameos from some of the other Pendleton residents as well. Preston's Christmas Escape was just amazing and the Cherry on the top of a fabulous series.
Rating: 5 Stars
Heather's Review:
Preston's Christmas Escape had all the elements of a perfect read for me - sweet characters, bondage, impact play and a HEA, all wrapped up in a feel good holiday story that is born out of an ugly incident as a catalyst.  Brigham Vaughn captures the second chance romance aspect so well, the push and pull of being apart for more than a decade and the attraction that is still there...
I love everything about Preston's Christmas Escape, from the pacing to the cameos from other characters from the Naughty In Pendleton Series.  If you've read the rest of the series, you need to read Blake and Preston's story... it will give you all the happy feels!
Rating: 5 Stars
BDSM Bondage Christmas Heather holiday Reds Book Reads second chance Series