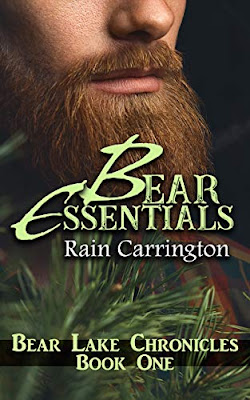 A sleepy little town doesn’t know what, or whom, is about to hit it when Ked, Kaden Edmond Donegal, comes there to live.
Hyper and determined, Ked longs to be a great forest ranger, taking care of the land, watching over it like its protector. What he didn’t count on is falling in love with the people there nearly as much as the land, and one in particular that doesn’t give him the time of day.
Sean Ashby moved to Bear Lake to hide away from the world after he nearly died while serving in the army. A local artist, he makes his living bringing pieces of wood to life with stories of their own. When he sees Ked, he sees someone who needs tamed, but he doesn’t feel as if he’s up to the job.
Not giving up on the bearded ginger bear, Ked does everything he can to get in the way of the man, and he finally gets what he wants. Or, at least, what he thought he wanted. Sean is a dominant who needs a submissive, and Ked never thought of himself that way. With Ked’s rambling voice hushed and his hyper movements slowed, Sean leads him into a new life he didn’t realize he needs so badly.
The townspeople take him in as family, a man loves him unconditionally, and poachers are in need of catching. Is Ked up for his new life? Can he be a part of a community that is quirky and quiet, or will his own quirks and rarely silent voice make him permanently an outsider?
Contains BDSM and consensual sex between two men. Trigger warnings: abuse, violence and PTSD flashbacks.
Excerpt:
Having a very rare moment of quiet, Ked leaned on the frame of the door as he watched his two roommates going at it, letting him relive the months he’d rented a room from them.
They were a devoted couple, sure, but they definitely weren’t monogamous. As soon as he answered the ad for the gay-friendly room for rent, he’d had no idea what that would entail. The fact that two days after he’d moved in, he had been involved in an orgy, well, he could have never predicted that in a million years.
It was time to leave. His schooling was complete, his education less than his parents were happy with, but enough to be the forest ranger he’d longed to become. He was an officer of the law, the law of the actual land, a certified first responder, could work as a wild firefighter, and it was all about to be tested in one of the most beautiful places on the planet.
Bear Lake, Colorado.
“Are you going to say goodbye?”
Calvin looked up and grinned while Ron kept pounding him. “Be with you in about fifteen seconds, judging by his breathing.”
Ron was much bigger, a beefy gym rat that never once took his eyes from the hole he was pounding, making Ked roll his eyes. “Ron? Done?”
“Umph, umph, umph,” he grunted, then stiffened as he climaxed, bringing Calvin’s hips back and holding him there, leaning his head back.
Ked had seen that a lot over the previous two years but knew he wouldn’t miss it. He had no real feelings for the two except friendship, no matter how much they’d tried to pull him into to their relationship.
Calvin got off the bed, not a stitch of clothing on, and ran over to him, hugging him tight. “We’ll miss you.”
Usually talkative to the point of people trying and failing to shut him up, Ked, which was a nickname, hugged his friend back and kept from sobbing by biting the tip of his tongue, a move generally saved for keeping it from wagging.
Ron groaned as he moved from the bed, slapping him on the arm. “Yeah, it was fun. Keep in touch.”
Just sentiment from the big guy. “Thanks,” he croaked, the tears retreating some.
To Calvin, Ked started to ramble, “Thanks for everything, I mean, well, the sex was great, you know, but I mean the job, the movie theatre, you know, and feeding me until I got on my feet. I don’t know what I would have done without you, and it’s been fun, well, the sex, it was great, you know.”
“Shh, I know all that. You rambled about it for hours last night.”
Calvin was dark-skinned and skinny as a rail, but he blinked his chestnut eyes at Ked, and Ked melted. “Sorry. I know I did.”
“It’s okay. We’re gonna miss that, and you."
Author Bio:
I love writing, it's been my dream for many years, and in October of 2013, when my first book went live on Amazon, that dream came true.
Writing love stories that are centered on flawed but lovable characters is my passion. Finding love between people isn't easy, nor should it be. Even in a book, there have to be obstacles for the story to feel real.
I am a mother of three amazing people, and three adorable fur babies. I live in Colorado but love many other places besides my home. One state in particular is New Mexico, the state where I was born has always held a place in my heart.
People and places make my stories what they are. Each character I've written is a part of me in some way. Each place I write is as well. Adventures come in many ways, and each of my stories has taken me on an adventure that I treasure.
Come with me on my adventures and fall in love with my characters, as I have. I promise, you will love the ride.
https://linkre.ee/RainCarrington
#ThrowbackThursday