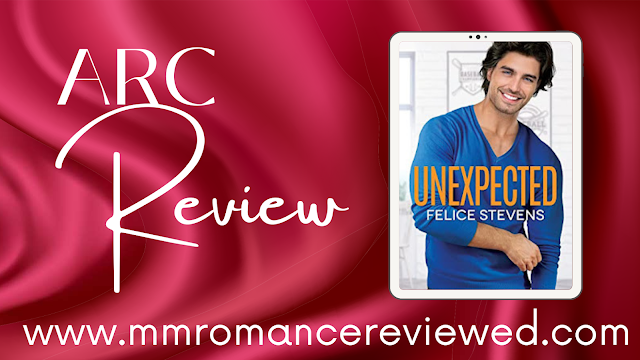 Unexpected is a truly phenomenal read. It will leave you with tear streaks and a smile on your face. Felice Stevens does it again! They definitely have a way with words.
From the blurb: 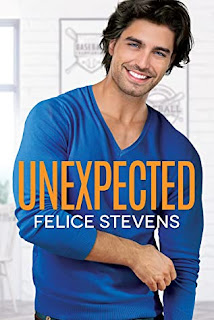 Party planner Colin Brightman doesn’t drink or dance, preferring to go to bed early with his spreadsheets and lists. All he wants is to forget the singles weekend his friends sent him on, but he’s stuck with a suitcase filled with condoms and skimpy Speedos that don’t belong to him.
He doesn’t expect his luggage thief to be ex-baseball superstar Walker “Walk-Off” Scanlon. Or that Walker has hired his firm to put on a charity event at his bar. Colin can’t deny the mixed emotions the annoyingly flirty man stirs in him, but he refuses to fall for someone who racks up lovers as easily as he once hit home runs.
No matter how much he might want to.
Walker Scanlon likes his men easygoing with no complications. He’s had enough of those in his life. So why is he drawn to tense and straitlaced Colin and his frosty scowl? Even his corny one-liners and jokes don’t get him a smile. But the sparks between them are undeniable. And that unexpected kiss? Amazin’.
Now if only Colin would stop running away. Good thing Walker is fast on his feet, because he has no intention of letting Colin go.
When Colin and Walker come face to face with past hurts and betrayals, they’ll need to trust themselves and each other to learn that heartbreak and love don’t go hand in hand. It’s the bottom of the ninth and if they swing for the stars, they just might hit the grand slam of a lifetime.
Angel's Review:
Unexpected by Felice Stevens was well.. unexpected. (Corny I know.) But very accurate.
I didn't really know what to expect with this book, the description did intrigue me but I was worried I wouldn't like it. I was worried for no reason! I think the author did a really good job writing the characters featured in this book. Each one added another layer and more depth to the overall storyline. The background characters were as important as the main ones were. They gave our main characters a kick in the behind.
Walker is a retired baseball player and after a betrayal by his family, he has a hard time trusting anyone. Hookups and one-night stands is all he knows, relationships are off the table. Until he meets a prickly event planner when they ended up with each other's suitcases. Total meet cute, right?
Wrong.
Our prickly event planner? His name is Colin and he's had a rough life. He grew up in a very rough neighborhood with only his mom. His mom worked hard to provide for the both of them but Colin was still the outcast at school. Then at college he was harassed and abused, and later in life his husband cheated on him. Years of heartbreak shaped Colin into the prickly man he is now. He doesn't trust easily, but Walker was determined to prove to him that not everyone is out to get him. That someone can love him, that Colin is worthy of it.
These two men made me cheer them on and made me want to cry with them. They have both had a lot of heartbreak and loss in their lives which is why I think they work so well together. They are able to help each other out.
Felice makes you feel the pain and anguish Colin feels, and the betrayal Walker feels. She definitely has a way with words, that's for sure!
I highly recommend this to anyone who loves grumpy/sunshine books. Anyone who... Wants to see two men who have been hurt in the past find a way to heal each other.
Rating: 5 Stars
Janet's Review:
Unexpected is a truly phenomenal read that left me with a book hangover! Colin is a party planner that lives a very boring life. His friends think he needs a vacation and sends him away for the weekend, but he’s uncomfortable. He’s not a drinker or a partier. Walker is a retired MLB player, owns a bar and lives life to the fullest, but he’s hiding things from his past. A case of a mix up of luggage brings these two into each other’s orbit. Walker wants Colin, Colin wants to be left alone.
Colin and Walker are fantastic together. Full on fun to read, plenty of steam. Sooo many freakin emotions! Grumpy vs Sunshine. I adored how Walker was willing to put in the work to be with Colin. They have a phenomenal group of friends that will do anything for them.
Overall a truly phenomenal read! Extremely well written with pacing that will hook you and not let you go. Unexpected will leave you with tear streaks and a smile on your face.
Rating: 5 Stars
Unexpected is currently available in e-book and paperback and can be read as part of your Kindle Unlimited Subscription
5 Stars Angel ARC Contemporary Janet KU meet-cute Opposites Attract Standalone steamy