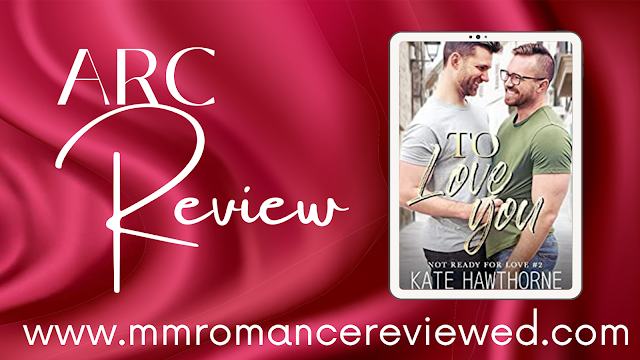 To Love You is the second book in the Not Ready for Love series and while it could be read standalone, I don't recommend it - you really need to have Wyatt & Grant's story from Not Allowed in the back of your mind to really get the depth of this book...
From the blurb: 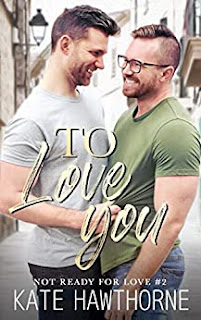 Adam and Cooper have been in love with each other for over a decade.
At the beginning of their relationship, Cooper thought he might have asked Adam for too much. Trust issues from his past pushed him to make steadfast demands that Adam wasn’t able to meet. Even though neither of them wanted to admit it, things between them were going to end before they even got started.
Ten years ago, Adam's life was in a state of upheaval. He thought he knew who he was and what he wanted, but the development of his friendship with Cooper into something more proved that couldn’t be any further from the truth. Forced to question things he’d long believed about himself, Adam faltered when he needed to stay strong.
A decade later, Cooper and Adam are back where they began. Wanting but nervous. Interested and unsure. Even though they're determined not to mess things up again, growing older hasn’t made them feel any wiser. On uneven ground, but fighting for a second chance, Adam has to get over his preconceptions about what it means to have control if he wants a chance at happiness, and Cooper has to admit it’s possible to sometimes bend without completely breaking.
To Love You is a 65,000 word romance between consenting adults with D/s themes.
Heather's Review:
I was honestly confused and a little taken aback that To Love You takes place ten years after we first meet them in Not Allowed.  It certainly increased the tension and the angst and makes you wonder just how Adam and Cooper functioned for ten years in the same town without each other when the pull is as strong as it is...
To Love You is the story of being open to change for the sake of love... of choosing to try to be what your partner needs rather than just giving up and because it's also BDSM, it's delicious to read... If you're a fan of self discovery, angst and men who kneel for their men... you'll definitely want to read To Love You.
Rating: 5 Stars
Nicole's Review:
Can you say HOT??? The scenes in this book were page melting!
To Love You is book 2 in the Not Ready for Love series.  Adam and Cooper's relationship is much more intense then anything presented or insinuated in the first book of this series. They are a pair of super smutty Switches!  I loved that Kate gave Cooper a dirty side hustle that explained his lack of need of customers in his bookshop from the first book.
As a second chance romance, I usually expect something drastic to have happened to change a facet of the relationship.  The growth of both Adam and Cooper from the breakup to the re-beginning of their relationship over 10 years does seem fairly minimal to me. They spent so long apart pining for each other, and all they needed to do was talk through their feelings. I did appreciate how Adam made efforts going forward to communicate his needs and feelings. All in all, there is a lot of believable chemistry in this book that is not for the faint of heart. I'm very curious how Wyatt and Grant will get their HEA, and maintain their relationships with Adam and Cooper. I can't wait!
Rating: 4.5 Stars
To Love You is currently available in e-book and paperback and can be read as part of your Kindle Unlimited Subscription
4.5 stars 5 Stars angst BDSM dom Heather KU Nicole second chance steamy switch