Not Allowed by Kate Hawthorne 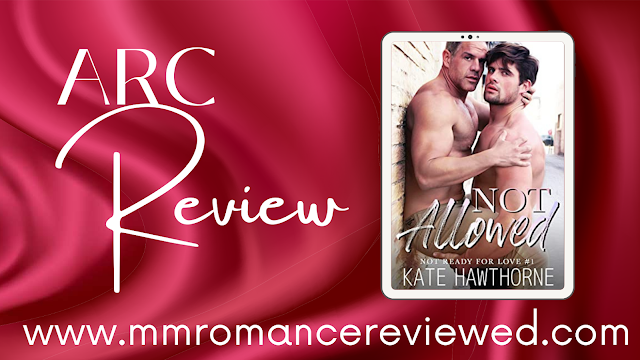 Kate Hawthorne warned us that Not Allowed was a cliffhanger... what she didn't say was that I'd have to wait until book three in the series for this story to resolve...
From the blurb: 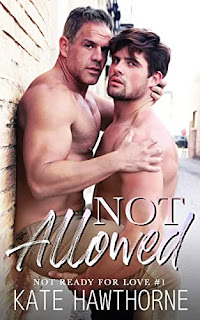 Wyatt and Grant are not allowed to want each other.
Wyatt is barely eighteen and Grant is his dad's best friend.
With only two months until his first semester of college takes him across the country, Wyatt has little more on his mind than exploring his newfound interest in men. He has a list of things he wants to experience, but he doesn't know where to start. At least not until he finds himself alone with the one man he shouldn't want.
Grant knows better than to get involved with his best friends son, but Wyatt knows how to be persuasive and he looks like everything Grant has ever wanted when he's on his knees. Grant hoped he'd kept his thoughts to himself, but Wyatt approaches him with a list and a proposition he doesn't want to turn down.
Nothing between them is certain, but one thing is promised. It's going to be a summer neither man will ever forget.
Not Allowed is part one of Grant and Wyatt's story and book one in the Not Ready for Love trilogy. This 50,000 word story is a cliffhanger, but the completion of this series will bring them their HEA.
Heather's Review:
This story is delicious - with Wyatt, fresh from high school and growing into his sexuality and Grant, an experienced dom, fresh out of a bad relationship - sparks fly!  Wyatt's father unknowingly (or does he suspect) pushes the two together regularly... even as he tries to build a relationship with his son that he hasn't really had a relationship with in five years...
Not Allowed combines the taboo nature of father's best friend with age gap, emerging sexuality, BDSM, Kate Hawthorne's signature need to make her readers squirm (in a good way) and the delayed gratification that comes with a cliffhanger...
This book not only teases the future for Grant and Wyatt, but it also introduces us to the characters for To Love You, the second book in the series and dangles some delicious details to whet your appetite for that one....
So, if you're willing to subject yourself to the delayed gratification, the tease as you will, grab Not Allowed right now and suffer along with the rest of us as we wait impatiently for the second and third books in the trilogy to release this summer... if you're a binger, add this book to your future TBR for the first week of July when Until Now also releases and you can read the entire series in one swoop...
Rating: 5 Stars
Not Allowed is currently available in e-book and paperback and can be read as part of your Kindle Unlimited Subscription
5 Stars Age Gap BDSM Cliffhanger Father's Best Friend Heather KU Series steamy