The Rule of Three (Village Affairs #1) by Kristian Parker 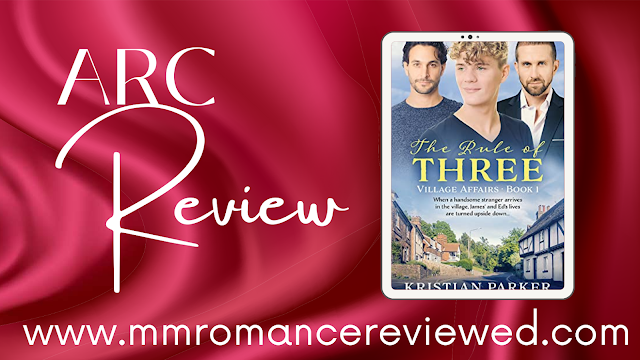 The Rule of Three shakes up James and Ed's quiet careful lives when they meet Arthur.
From the blurb:
When a handsome stranger arrives, James and Ed have to make a choice that will change their lives. 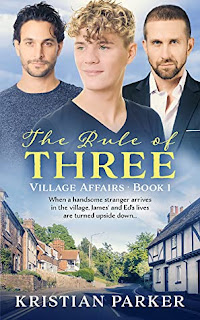 James Durkin is happy. He’s landlord of the pub, chair of the parish council and secret lover of his best friend, Ed Cropper. But Ed, tired of living in the shadows, dreams of living openly, something James can’t contemplate.
Then there’s Arthur Whittaker. When the handsome young primary school teacher comes to live in the village, he signals a future that neither James nor Ed ever saw for themselves.
But the small Yorkshire village of Napthwaite is a place that’s resistant to change, meaning the three men must be strong enough to forge their own path…
Will they overcome the odds—and tradition—to find the love they crave, or will their brave new world crumble to nothing under the pressure?
Reader advisory: This book contains instances of homophobia, and references to parental death and on-page drug taking.
Tatted_book_freak's Review:
A beautifully written second read by an amazing author to what I can only imagine is going to be an explosive series! His attention to detail was remarkable, tackling sensitivity within the homosexual community. Loved how he wove together bigotry and injustice,  only to confirm that love will always win in the end.
“ᴡʜᴀᴛ ɪꜰ ᴛʜᴇʀᴇ ᴡᴀꜱɴ’ᴛ ᴀɴʏ ᴄᴏᴍᴘᴇᴛɪᴛɪᴏɴ? ᴡʜᴀᴛ ɪꜰ ᴡᴇ ᴍᴀᴅᴇ ꜱᴜʀᴇ ᴡᴇ ᴡᴇʀᴇ ᴀʟʟ ʜᴀᴘᴘʏ?”
There were connections all over the place with this story! Whether it be James and Ed, Arthur and James, or Arthur and Ed, there was definitely excitement with every turn of the page. I absolutely loved the dynamic of these three men apart, but even more so of them together.  The chemistry individually was sizzling, but the three together was scorching hot!!  Definitely recommend to what is sure to be a smoking hot series, especially with this beginning!!
Rating: 5 Stars
Heather's Review:
It took a few minutes for me to get into the rhythm of Kristian Parker's writing style, but once I did, I was transported to Napthwaite and drawn into the story.  The Rule of Three was so much - homophobia, internalized homophobia, secrecy, drug use, small town, fresh start... there were things I loved and things I didn't, but the depth and focus of Kristian Parker's storytelling kept me firmly in their world and I was invested in the outcome.
This book had so many elements I love - MMM, steamy chemistry, second chances and starting over, but I wished there was more communication about the poly relationship.  I will say that I can't wait to visit Napthwaite again and see more of these characters in the future..
Rating: 4 Stars
Janet's Review:
Open poly romance in a small English village. Enjoyable and pleasant read!
Ed and James are best friends and in love with each other. They live in a small town and cannot be open. I loved the beginning of the story but as I got into it, I got a little angry with James and felt bad for Ed. James was more concerned with public perception and his pub that he was for his love of Ed. Ed was tired of hiding who he was. Then we are introduced to Arthur! I adored Arthur, he was open and honest and would not hide himself to save himself.
Overall, I really enjoyed the story, I felt it was well written but I struggled with it holding my interest in the beginning of the story. Once I got into it I was totally vested in Ed, James and Arthur’s romance.
Rating: 4 Stars
Angel's Review:
Kristian Parker is a new-to-me author, and I have to say I'm glad I stumbled across this!
The Rule Of Three is the first book I've read by Kristian Parker and I hope it isn't my last.
When I first started this book I was worried that it would either be repetitive, or that it would feel like a relationship with Arthur would be forced.
I have to be honest, I wasn't a fan of how this started out but it got better and better the more the story went on. I loved Ed's dog, she was so adorable and the way the author wrote the connection between Ed and her was so cute! I think that all of these characters were in the wrong at some point with how they handled things. Obviously the ""villain"" in this story is Liz, James's sister. I couldn't stand her character, she was so harsh for no reason! So if the author's goal was to make us readers mad at at least one character, they definitely achieved that goal.
I do have one main issue with this book though, primarily Arthur's character. His character was wrote as having a problem with drugs, right? Then he was clean... Then relapsed again. The author never  mentioned how he got clean again, or how he was doing living without drugs he was just taking. It was sort of glossed over. I just think that part of the book could've been better detailed.
Overall though I do think this was a good mmm book. I definitely recommend this!
Rating: 4.5 Stars
Check out the Release Blitz for The Rule of Three by clicking the graphic below: 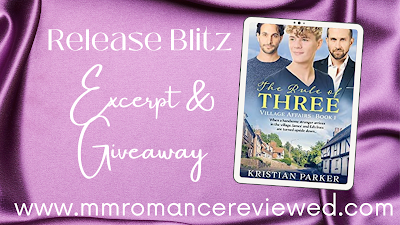