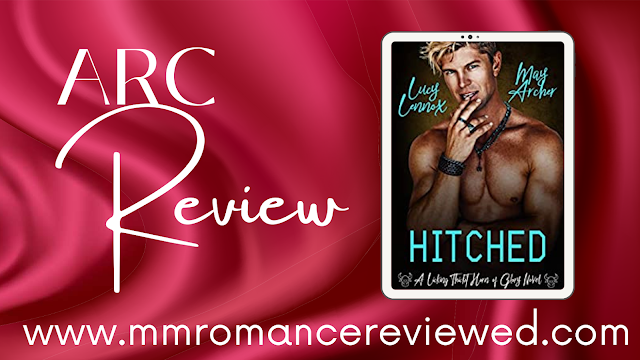 Here's the thing with books from the Licking Thicket. It's NOT meant to be taken too seriously. These books are fun and outlandish. They aren't based in reality. You're just supposed to laugh and swoon and enjoy the utter absurdity. I like to read them after a particularly angsty read because they are a great way to reset and make me smile.


From the Hitched blurb: 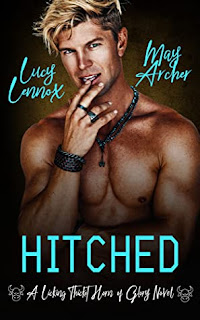 But it turns out there are some situations Champ can’t handle alone, like:
• Going undercover as a wedding planner to retrieve some missing cartel data in time to avert an international crisis.
• Keeping his jerk of an ex from threatening his business.
• Preventing Quinn Taffet, Licking Thicket’s gorgeous, charming new wedding planner—and Champ’s fake fiancé—from getting into danger… or from getting the wrong idea about their relationship.
• Fighting the pull that lands him in Quinn’s bed night after night, despite his very best intentions.
• Stopping the pun-happy matchmakers of the Thicket from destroying the sane, well-ordered life he’s built for himself.
• And, most troubling of all, protecting his traitorous heart from all the romance in the air.
In short, Champ needs an extraction plan ASAP before he finds himself well and truly… hitched.


I'm going to be honest here. I didn't read book 1 in the HOG spinoff.
I did however, read all the others based in this world and loved them. Though Hitched doesn't include all the Johnson and nutter innuendos we get from the original series, the storyline is based squarely in the Thicket.
There is no gallivanting to foreign countries in this one. It can also definitely be read as a standalone which the authors have stated.
I loved the concept of Quinn and Champ's relationship being described as a sixty something night stand. Both are relationship phobic and neither are willing to concede they are most definitely in one.
Of course there are plenty of Thicket residents whom point this out in various ways and Champs comings and goings from Quinns place are a topic of gossip as well. Gotta love this town.
The plotline also includes some crazy wedding planning that definitely does NOT go to plan, as well as Champs security company being after a certain rare horn with stolen data on it which I took to be a gaming console of some type.
There's also plenty of great steam mixed in in case you were wondering. I enjoyed Quinn and Champs story as well as being back in this zany town.
Next up is an enemies to lovers with the two resident hackers. They get some page time in this one so its made me excited to see how they are going to go from basically at each others throats to in each others beds. Also enemies to lovers happens to be my favorite trope so you better believe it's already on my TBR.


Quinn is a wedding planner and Champ is the owner of his own security company. Quinn and Champ have an ongoing one-night stand that never ends. Both are so stubborn and serious that they don’t do relationships but never realized that they were in one.


Their escapades are the stuff that comedians couldn’t even dream up. They are sarcastic and snarky and so very perfect for one another and still in denial about what they are.


I loved how Quinn wasn’t afraid to put Champ in his place. Overall, a truly phenomenal read!! Well written with that perfect pacing that makes it difficult to put down.


I picked up Hitched after finishing an emotional read, knowing that when Lucy Lennox and May Archer get together the book will contain more laughs and more high jinks than just about any book out there and I was not disappointed!


I was laughing out loud within minutes - Quinn and Champs love story begins well after their first meeting and during a time when they both adamantly refuse to be in a relationship... until Champion opens his mouth and they go from benefits past boyfriends to engaged... and of course it happens in Licking Thicket so you have all the added bonuses of the other hilarious characters!


What I love most about this book is that the love story is still front and center despite the laughs, gags and an undercover mission to get a sparkling Horn of Glory... Another truly exceptional read from this duo and a perfect book to pick up when you need a pick me up!

Hitched is currently available in e-book, audiobook and paperback and can be read as part of your Kindle Unlimited Subscription