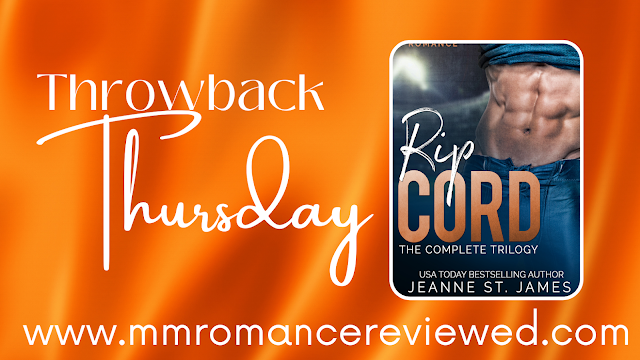 Can you believe it's been four years this week since Jeanne St. James released the Rip Cord trilogy as a compendium? 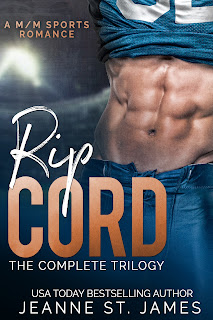 Gil Davis hated high school. Ever the geek, he has no intentions of attending his 10th year class reunion. The last thing he wants is to relive the taunting and teasing he received during his teenage years. However, there is one thing he misses from high school: the star Varsity football player. The one he had a crush on from the first day he laid eyes on him. But the last thing he expects is the now pro football player to come back to their home town to attend a lame high school reunion. Known as the Bad Boy of the NFL, Ripley “Rip” Cord, not only shows up, but shows up without a date and an eye for Gil.

When Rip Cord is kicked out of the NFL, he shows up unexpectedly at Gil Davis’ front door. With his career over, Rip’s finally ready for a future with Gil, if Gil’s willing to give him another chance.

Here's a delicious excerpt to whet your appetite:

"Ripley “Rip” Cord was just as tall as Gil remembered. Around five inches taller than him, not that Gil was a squirt. The football player was at least six foot two.

And every inch of him was muscle. Not lean muscle, but heavy muscle. Heavy, rounded, lickable muscle.

Katie wiped her mouth with the back of her hand. “As if you aren’t.”

Gil snagged her wrist and backpedaled until he rammed into something hard. It was the table with the place settings.

Gil peered over Katie’s shoulder to see if his klutziness had caught Rip’s attention.

Luckily it hadn’t. The man was completely surrounded by their old classmates clamoring for his attention.

Throughout the years, he’d followed Rip’s career in the newspapers, on the evening news, on ESPN.

And in the tabloids.

Rip was well-known. Unfortunately it was as the “bad boy” of the National Football League. He started out with a great career in the NFL, drafted straight out of college. He was one of the best wide receivers in the league, but it was all his rumored problems that kept him in the spotlight, not his stats.

And that famous wide receiver was here. Now.

“Jesus, Gilly, because you have a crush on him!”

Heat crawled up Gil’s neck. He was glad the lights were turned down in the gymnasium. He didn’t want anyone seeing him blush.

Hell, he was twenty-eight years old. He shouldn’t be blushing. He felt seventeen all over again.

He pulled away from Katie to study the name cards remaining on the table. Of course, he read the same card over and over before Katie squealed.

Gil nervously tugged Katie next to his side and threw an arm haphazardly around her shoulders.

“Ouch,” she yelped as her curly red hair got caught on the button of his cuff.

“Sorry,” he whispered and straightened up just as Rip arrived at the table.

His knees buckled, and he grabbed for the nearest solid thing: Rip.

Rip grasped his forearm and held Gil steady. “You all right, buddy?”

Gil looked up—and up—into deep blue eyes. Eyes he had never forgotten. To this day they haunted his dreams.

Dreams he usually woke up from with a raging hard-on.

Gil opened his mouth to answer, but nothing came out. Rip smacked him hard on the back.

“Are you sure you’re okay?”

“Did you find your name card yet?” Rip asked, flashing him a bright, white smile.

Rip moved closer, almost hip to hip with Gil, to study the table of white folded cardstock. Gil fought the urge to lean in and nuzzle the larger man's neck, inhaling his manly scent. Roll around in it like a dog.

Hell, he'd probably end up sporting a black eye if he tried.

Rip Cord is currently available in e-book, audiobook and paperback from Amazon.  It is also in wide distribution on multiple platforms: https://books2read.com/RipCord