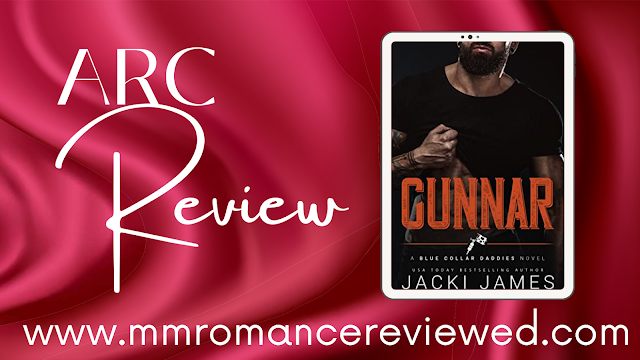 Gunnar is the 5th book in the Blue Collar Daddies series and if focuses on Gunnar, a tattoo artist and Simon, a nurse. Simon is good friends with Ben and the other boys from previous books - although this book could be read as a stand-alone if you wanted to.
From the blurb: 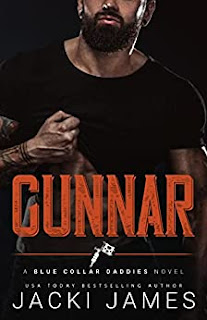 There is no way the bad boy with the piercings, tattoos, and wicked grin at the end of the bar could be the sweet Daddy of my dreams… or is he?
After a brutally bad breakup with his ex, Simon no longer trusts his own judgement when it comes to men. Especially not men who have trouble written all over them. Men like Gunnar Thompson.
Gunnar may look like a grizzly, but the people closest to him know he's really more of a teddy bear. All he wants is a boy to love and cherish, and he wants that boy to be Simon.
Convincing Simon to give him a chance to prove he's the Daddy he's been waiting for will take a lot of work and even more patience, but Gunnar has never been one to back down from a challenge. Especially when the prize is Simon's heart.
If strong men who work hard, play hard, and love even harder are your thing you won't want to miss the Blue Collar Daddies series.
Reds Book Reads Review:
Simon has been through a tough time and is mistrustful of men and has almost decided to give up on looking for a daddy but when his friends convince him to go to a club night he meets Gunnar and things start to look up.
I adored how sweet Simon was and I really felt for him when he was just so tired all the time. Gunnar was just perfect and so caring towards his boy. I loved how the relationship developed and how the characters from previous books were all brought into the story and we got to learn more about the progress of their lives. Gunnar's niece was just so cute as well and she totally stole the chapters she was in.
Gunnar is another great addition to the Blue Collar Daddies and I can't wait to see who is up next.
Rating: 5 Stars
Heather's Review:
Simon and Gunnar are so sweet and adorable together - I love their contrast of ages, sizes and appearance and also just how similar they are in personality... they both just want someone to love them and want them...
Gunnar is a patient and caring daddy who wants to protect and care for a boy and Simon is just the boy to need a caring and wonderful daddy.  I've been waiting for Simon to get his HEA since we met him and I don't think I could have picked a better daddy - one who not only talks the talk, but walks the walk...  adorable niece, kittens and meeting the other characters from the Blue Collar Daddies series included.
I'm so looking forward to the next Blue Collar Daddies book and also the other book that Jacki James teases at the end of Gunnar - a character who we've all been asking to get his HEA but wasn't a blue collar daddy...
Rating: 5 Stars
Gunnar is currently available as an e-book and can be read as part of your Kindle Unlimited Subscription
5 Stars Age Gap ARC Contemporary Daddy Heather KU Reds Book Reads Series size difference slow burn Standalone