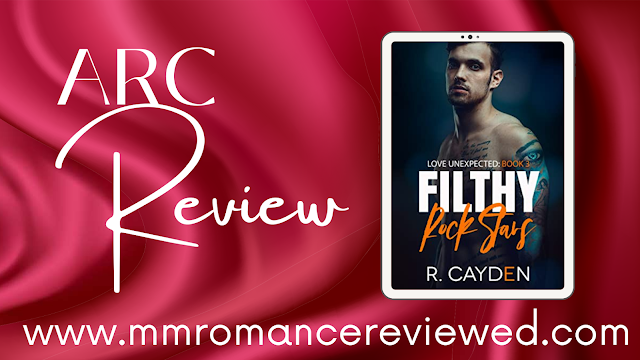 I love a good anonymous hook-up that catches feeling trope... and Filthy Rock Stars adds in some delicious complications and R. Cayden's signature steam...
From the blurb: 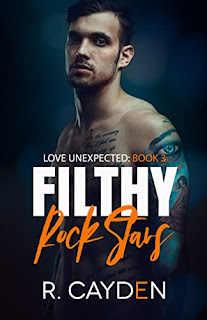 I can’t stop thinking about him, but I don’t even know his name…
The stranger with the rakish grin upends my world.
It’s not just that the tattooed bad boy saves me from my ex with a getaway motorcycle ride.
I confess secrets to him in the rainy park that I’ve never told another person, and we do things in the shadows that I’ve only dared fantasize about.
I’m surprising myself a lot lately.
At the Natural History Museum where I work, I take a chance and share my secret, geeky music project with friends, only to stumble my way into an audition with the hottest rock band in the world.
Actual rock gods who, for some reason, really like my keyboard solos.
But a shy, ordinary guy like me could never be a rock star.
And the brooding man I now meet for anonymous hookups can’t be anything more.
We’ve set strict boundaries, and keeping them in place is the only way this can work.
With a heated rivalry erupting between my new band and Forbidden Destiny, a hard rock band that’s dominating the charts, I don’t have time to fall in love anyway.
Until I finally see the bassist in Forbidden Destiny, and love comes straight for me.
Filthy Rock Stars is an M/M rock star romance with secret identities, celebrity hijinks, and two sweet guys. It features a geek who  becomes a rock star, a rock star who has always been a bit of a geek, and enough dirty talk to steam up a sauna. The third book in Love Unexpected, it can be enjoyed as a standalone or as part of the series.
Heather's Review:
I love the way that Filthy Rock Stars starts out in random anonymity - a guy on a motorcycle 'saves' a random stranger from having to deal with his ex-boyfriend and off they ride... no names, no details... and they keep the anonymity going along with a delicious pubic sex kink, all while their lives move in orbit with each other until they end up spinning closer and closer to each other...
I loved the pacing, the little breadcrumb tidbits that Prince and Solo would offer to each other and the fly on the wall view that I had of their lives... chef's kiss... If you like a rock star romance with complicated rivalries, hidden passions, and steamy semi-pubic scenes, you'll find that Filthy Rock Stars lives up to it's name...
Rating: 5 Stars
Filthy Rock Stars is currently available as an e-book and can be read as part of your Kindle Unlimited Subscription
5 Stars Anonymous Heather hookup KU Rockstar second chance secret hookup secrets Strangers to Lovers