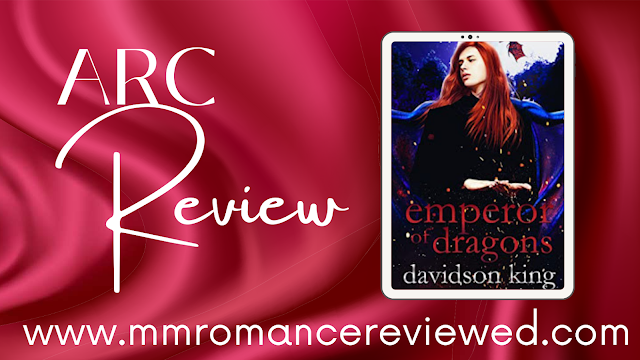 "What a emotional rollercoaster this book was! It was well worth the turmoil." Angel, on Emperor of Dragons.
From the blurb:
Peace has descended on Black Veil once more, and hope is on the horizon.
Until a new threat arises… 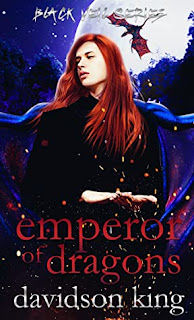 Emil is the head of security, first line of defense for Cain and Black Veil. He takes great pride in his job, is fully prepared to sacrifice everything in order to keep everyone he cares about safe and the world from crumbling. But the Tritons and Sirens have approved a treaty, and the dragons will most likely agree to allow vampires to use their blood for sustenance and protection once again, so all is as it should be. Then Emil meets the emperor of dragons, and his life goes from calm to chaotic in the blink of an eye—loyalty and love now battle for dominance in his head.
Aldrich is the emperor of dragons, and he cannot afford to make mistakes. He and his clans enter Black Veil in the hopes that The Blood Boss will join them in the fight to save his family. Aldrich is ready to lay down his life and for anything else thrown his way—except the crystal-eyed vampire who immediately captures his interest. Emil is everything he has always wanted and would never dare dream of, and when all he holds dear is threatened, it’s Emil who keeps his dragon grounded.
When unimaginable dangers swarm into Black Veil, the vampires and dragons join forces and call upon every living creature in Black Veil to defeat the enemy. While love blooms, lives perish, all to fight a war against the darkness threatening to consume the world. Will Emil and Aldrich claim victory and have their happily ever after, or are they doomed to an eternity apart?
Angel's Review:
Since I did get a copy of Emperor of Dragons early I decided to reread the first in this series, The Blood Boss. I'm so glad I decided to read them back to back, it made the experience much more enjoyable. While you can read the two books as two separate standalones, I highly recommend reading them in order.
After a war with the creatures of the sea the people and creatures in Black Veil never thought they would be at war with a forest. A forest of pure evil. Not just that but they would have never thought that they would be fighting alongside dragons. Even the Emperor of Dragons himself.
Writing this review is complicated for me because I don't know how to describe this story in my own words without giving away spoilers!
Emil is a vampire, he's also the Blood Boss's right hand man. So, when the Emperor of Dragons arrives on their doorstep asking for help on a personal matter Emil is the guy for the job.
Aldrich needs help. Who better to ask for help then the Blood Boss himself? When he arrived in Black Veil he never expected to find Emil. He was told long ago that with him being the Emperor of Dragons he was never going to have a fated mates. However, upon arriving in Black Veil he finds out just how wrong that is. Being fated mates makes both of these guys happy but with potential war on the horizon they can't really celebrate.
Here are my thoughts on this book:
Excellent writing, the characters are well thought out and each character adds something to the overall storyline.
Phenomenal background! I was blown away with how well the background was written in the first book and I'm so happy that it continued into this story as well.
Fated mates was a feature in this story but it wasn't the main focus of this story. I think while I'm on this topic I'll say my only "issue" with this book is I wish there was a little more focus on Emil and Aldrich being mates. However, I understand why that wasn't a forefront in this book.
If you're looking for slow burn this isn't the book for you. But! If you're looking for a book that will make you feel every emotion all in one sitting, than this is for you. If you love Sirens, Merpeople, Vampires, dragons, pixies and much, much, more than Emperor of Dragons is definitely for you! If it isn't obvious already I highly recommend this!!
Rating: 5 Stars
Janet's Review:
This story sucked me in, didn’t let me go easily. I freakin love Dragon/Vampire stories especially ones that are fated mates. The author knocked this one out of the ballpark.
It was magical, full of so many paranormal entities. Dragons, vampires, merfolk, fairy’s, fae, witches and seer.
Emil is head of security for Cain who we met in The Blood Boss. Aldrich is the emperor of dragons.
Aldrich has come to the Black Veil needing to help his family that has been taken by dark magic. He finds his fated mate in Emil.
Spicy, steamy with a side of sweet and sizzling chemistry!!! Overall, a fantastic read!! Emperor of Dragons was really well written, the pacing flowed so well that the story wouldn’t let me go, highly recommend.
Rating: 5 Stars
Emperor of Dragons is currently available as an e-book and can be read as part of your Kindle Unlimited Subscription
5 Stars Angel ARC Fantasy Fated Mates Janet KU Series vampire