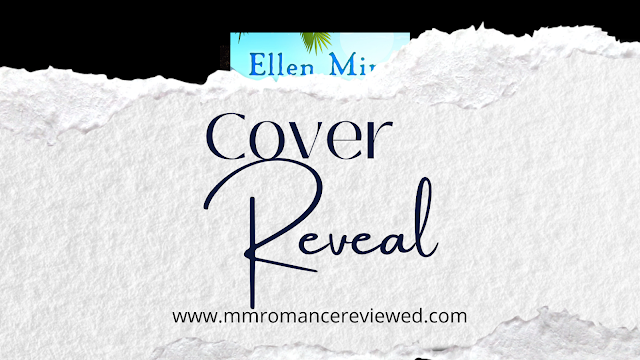 So pleased to be able to share the cover and an exclusive excerpt of Fangscreen, a Summer Vampire Rom-Com by Ellen Mint, which is currently available for pre-order and releases on July 19th!  Isn't this cover amazing? 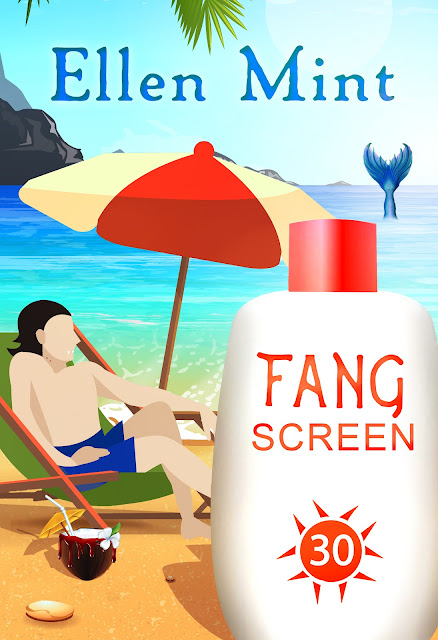 Blurb:
Summer bites.
What could be more pathetic than a vampire trapped on a tropical island? Jareth Hale despises everything about his exile to Samaná from the tourists’ necks slathered in sunscreen to the blaring sun overhead. He’ll do anything to return to his vampire castle in the forest until he falls onto Laiken, a sun-kissed beach himbo.
Laiken is sweeter than spun sugar and hotter than Adonis in a Jacuzzi. He’s perfect…except for one tiny thing. He is a vampire hunter—possibly. Jareth isn’t certain. Despite his vampire leader and ex telling him to stay away, Jareth believes flushing out this nest of hunters will earn him back his castle. And, if it keeps him in the orbit of the adorable, golden-skinned Laiken, then all the better.
Unbeknownst to him, Laiken is hiding a secret that will change everything in Jareth’s undeath. All Jareth thought he wanted and deserved was solitude, but Laiken’s opening his eyes to a whole new world. Can an old vampire open his heart and coffin in time to catch this impossible love?

Jareth accidentally threw a party to try to catch the eye of Laiken and invited a possible posse of vampire hunters by mistake. He tries to keep them off his trail while also struggling to flirt with his handsome beach man.

“Yes, Mr. Lord Hale?” The thorn in my side stepped closer. “Did you eat any of the food or drink any of the drinks?”

There is foulness in his face. Be wary of what slips from your lips.

“A good host makes certain his guests are well taken care of before he worries about his own needs.” My answer was met with only colder stares.

“Well, that doesn’t seem fair. Here.” He picked up a pitcher of a red liquid and poured some into a glass. “Drink this. It is your party after all.”

“I couldn’t take a drink from you.” My tone was polite and humble, but the words were a warning.

Meeting him eye to eye, I brought the cup to my lips. The gathered crowd leaned closer, all save Laiken who was digging into the sand. In one quick toss, I downed the liquor without tasting it and shook my head. “Whew, that has quite a kick.”

The man challenging me took the glass and asked, “Want another?”

“I’d be delighted.” Whatever game he was playing at, he’d guessed wrong. Liquid I could handle, but if he asked me to eat a wad of cooked animal flesh then they’d all be privy to the horrors of vampire IBS.

As I squared my shoulders for the oncoming challenge a hand bounced against, then cupped to them. I darted my gaze to the side and nearly collapsed from the welcoming smile. “Can I have one too, Andre?” Laiken inquired.

The name of my minor nemesis was squirreled away in a cubbyhole of my mind. The rest of my neurons were too enthralled trying to memorize the face, neck, and half a shoulder practically pressed against me. By the dancing firelight, his skin glowed not as those advertisements on the back of body oils proclaimed, but with an actual radiance casting from every pore. Though, he was far from a trussed-up dandy. No one with a jaw as square as the aft of a ship could be considered so.

My vision kept darting from the hollow below his ear to the edge of his jawline. What would it take to trace my tongue down that path and nip the side of my fangs against it?

I flushed as if Andre had read my mind instead of passing me another drink. This one I held tighter to my chest while Laiken accepted his. “Here’s to this great party!” he announced, raising his glass.

I mimicked him, and Laiken smacked his drink into mine. The dull thunk of flimsy plastic striking together barely challenged the steady beat of his heart. As I drank, my ears tuned in to that sound. The longer I listened, the more my chest ached as if the dead organ wanted to beat in time with his.

“Oh dear, well’s run dry. Shall we?” Andre asked, tipping over the pitcher as if I were the one to blame instead of his ego. The others rose from their sandy seats around the bonfire as the group began to shamble back to the house.

One of the girls wrapped half of her body around Laiken who took a generous drink from his glass. “Come inside with me,” she demanded.

Of course. He was magnificent to gaze upon and displayed a depth of kindness I’d thought impossible in this world. No man of that cut would not have a woman at his beck and call. Flushed with foolishness at how I’d acted, I turned away to stare across the pitch-black waves. They surged back and forth across the horizon like an army cursed to never return home.

It wasn’t as if I had any amorous intentions with him. A vampire and a mortal in bed was a recipe for shattered bones and punctured organs. I could still have him as dinner instead of for if I waited my turn. After he’d spent himself with a woman seemed the opportune time to strike. Why should I even care what his intentions were?

“In a minute,” Laiken said, startling me. I twisted around, and he caught my eye. A smile began aimed at me, but he turned it on her. “The night’s too perfect to leave just yet.”

She tossed her hair off a shoulder then flounced after the others, leaving me completely alone with the man from the beach. All of my machinations led to this moment. I wrapped my hands tighter to my red cup, crinkling the plastic inward as I swallowed my inhibitions and spoke to Laiken, “Do you like…sand?”

Jesus Christ. I slammed the drink to my mouth, trying to stop the mass of other idiotic questions flying from my lips. Some still came, bubbling up in the fruity concoction which I could only then drink down.

Laiken laughed and stared down at his legs. I did the same, discovering calves that’d have caused Renaissance sculptures to weep for days. “Sand seems to like me.”

“It does find a way to wiggle into the most inopportune areas on the body,” I said.

“Yeah, and it gets in all the cracks too!”

After the riveting sand conversation, our dialogue fell to stillness. Only the roll of the waves washed over us both staring out across the ocean. I kept glancing to the side, watching and waiting for the man to realize he’d made a terrible mistake and run inside to join his friends. Not that I could blame him. Being trapped in a conversation with myself sounded like damnation.

I finished off the last of my second drink. As it trailed down my throat, the burn softened to the sensation of warm butterflies brushing against my body. He had no reason to remain out here, no reason to even be attending my pathetic attempt at socializing.

“Thank you,” I whispered. When the sincerity in my voice reached me, I nearly flung myself into the sea.

“For the coconut,” I tacked on quickly, my lips knotted in a smile of mirth.

Laiken raked a hand through his hair, and he nodded. “Happy to help. They do a lot of coconut parties where you’re from?”

“Not particularly. There aren’t many coconuts…or parties.” The last time I’d been surrounded by so many people they were trying to wrench my head off to boil it in lemons. Folklore had some strange ideas on vampires. “I’m afraid I’m quite out of my depths on this endeavor.”

“Really? Cause this one’s great. Look at all those happy people!” He gestured toward the house where I was able to spot a handful of couples laughing on the deck and one person on the roof vomiting over the side.

“Is that all it takes? Food and vino to placate the masses into a happy stupor?”

“Music helps too,” Laiken said honestly, and it caused me to bark out a laugh.

“True. The beat is infectious, if not bone-crushingly loud.”

“That’s the best kind. You feel it all over.” He ran his hands from his exposed chest down his strong waist and over his thighs.

“I want to feel you all over.”

“Huh?” Laiken stared at me, and I slapped a hand to my mouth. That was not spoken aloud. I’d thought it. Surely. What was in that drink?

My body tried to crumple into a heap while my legs remained rooted in the sand. Escape, flee, mesmerize him to forget what happened. The last seemed the best option. I took a step closer, prepared to fool his mind, only for Laiken to turn to me and hold out his hand.

With you? And me? Our bodies swaying and sweeping practically against each other to an enchanting beat?

“That sounds…” Liquid courage intoxicating the blood in my system caused me to reach for his hand to take it.

“Laiken? Are you coming or not?” The woman stood with her hands on her hips, her svelte body a silhouette against the party house lights.

“Be right there!” he shouted back. “You wanna?”

He wished to dance all together as a group. Forget my falling hopes, there is no reason to feel sorry for myself. “Yes. I think it will be delightful.”

Laiken smiled wide and practically leaped into the air. Side by side, we trudged up the hill to the house, our hands nearly brushing against each other. The woman turned away from him and went inside. The last of the furniture was tossed to the perimeter, allowing a mass of bodies to leap back and forth in place.

“Hey!” Laiken shouted above the guitars and drums pounding a pulsing beat into the air. His friends raised their hands and pulled him to their section among the dancing mortals. I paused, prepared to linger on the outside rings, when—much like Virgil—Laiken guided me into the inner depths.

In the heart of the pulsating throb of music, light, heat, and lust, I began to dance. No stuffy waltz or box trot on debutante floors—I swayed my hips and gyrated my shoulders. Laiken whipped his arms about his head and…undulated his stomach and hips.

An inferno burst across my skin, but I could not look away. With every shimmy and shake, Laiken’s thigh would bounce against mine, and I’d lean closer. He locked onto my shoulder and pulled me to him. Before our faces could touch, he turned his to the side and asked in my ear, “Are you having fun?”

“Yes,” I admitted, honestly enjoying myself.

Laiken smiled and nodded before he released me and raised his fingers in the air. “Told you. Best party ever!” he shouted and spun in a whirling circle.

Yes. I bit my lip and watched him joyfully bounce about in place. This is.