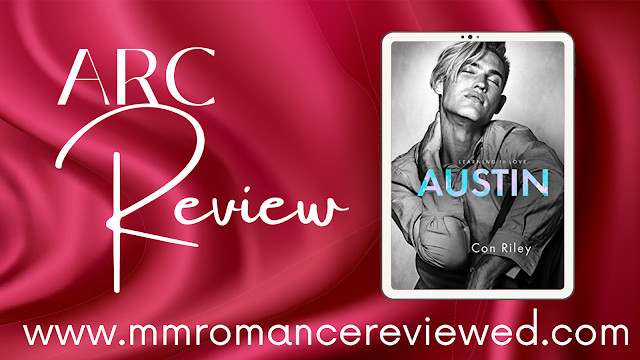 Austin is an epic and beautiful love story between to slightly broken men. Con Riley creates a world that you get lost in. Austin is a must read!
From the blurb: 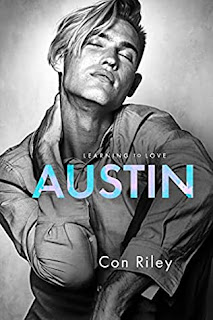 Austin Russell doesn’t belong at a small school like Glynn Harber. He's meant to be a high flyer in finance not a book-keeping bursar. Now there's only one renovation project left to budget, it’s time he toughened his soft heart and got back to climbing the corporate ladder.
The truth is he’d rather climb Maisie Dymond’s father.
That urge doesn’t add up—Dom Dymond is his polar opposite—but when a near-miss brings them together, Austin discovers there’s more below his laid-back surface, especially as Dom’s determined to win the bid for the school's last rebuilding project.
Working in proximity means Austin can’t deny that they're opposites who don’t only attract, they combust whenever they’re close. Telling himself it's only a fling doesn’t ring true when Dom opens up about what keeps him in Cornwall. He’s there to heal his fractured family, and he wants Austin as part of it.
That openness makes Austin want to share too, but will Dom still feel the same attraction once he knows what drives Austin to keep climbing his ladder?
Janet's Review:
Every time I read one of Con Riley’s stories I get so emotionally invested and totally submerged into their world they’ve created.
We’ve met Dom a few times but never really knew much about him until now. I had a passionate dislike for Austin in the beginning of Luke’s story but we learned he wasn’t all that bad. In fact he was a little broken and just needed someone like Dom and Maisie to help heal him.
Austin and Dom both carry a bit of damage, but Austin has let his rule his life. Con Riley writes such beautiful and realistically felt stories. I had so many emotions flowing through me, tears and smiles alike. The story kept me engaged, I literally could not put it down, who needs sleep anyway?
Overall, Austin is a phenomenal read! The story was really well written, the pacing flowed smoothly. This is a must read!
Rating: 5 Stars
Heather's Review:
Con Riley writes emotional stories with a romance plot... and Austin is another one that had me riveted to my kindle....  Having not liked Austin at the beginning of the series, watching his transformation into my favourite character of the series was phenomenal!
Con Riley takes two men with crooked lifelines and makes them each other's HEA lifeline and it's beautiful to watch the story unfold with just enough heat, just enough angst and incredible worldbuilding around them.
I do recommend that you read Austin in sequence with the rest of the Learning to Love series, because I've loved each and every one, but this story can stand on it's own if you start here.
Rating: 5 Stars
5 Stars ARC Contemporary Emotional Janet Opposites Attract Series