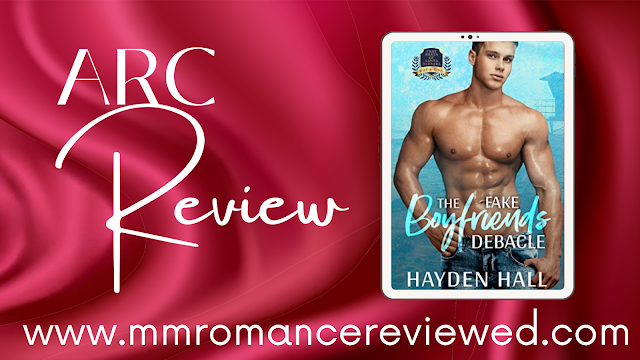 Hayden Hall has started another college series... that should say it all...
From the The Fake Boyfriends Debacle blurb: 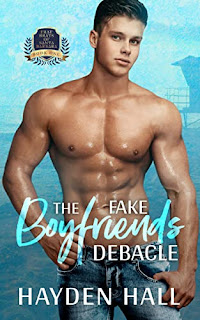 We think we're fooling everyone with our fake relationship, but maybe we are the only fools around.
Caleb
Nobody ever looks past the mask I wear. Nobody bothers to scratch the surface. Not until I meet Jayden Harris, the adorably bossy scholarship student with a razor-sharp focus and an unbreakable determination to be the best of us all.
He says he doesn’t have time for dating. He says I’m just a player. Yet every chance we get, we orbit one another. If I could prove to him that I’m worth falling in love with, he might change his mind.
But asking him to be my fake boyfriend for a massive family gathering probably wasn’t my greatest idea. Dad is tearing us apart and my will to fight for control over my life is fading. My plan is ruined.
We’re a lost cause, but I just…can’t…let him go.
Jayden
It was just a one-time thing. And then a two-time thing. And a three-time thing… Before I know it, I’m in his fancy car, heading to the Wine Country for an extended weekend. My mission? Be the loving boyfriend you bring home to meet the parents.
I’m risking my scholarship and my future at the elite Highgate Academy for a charming stranger in need of a boyfriend. Why? I wish I could tell you. All I know is that Caleb’s funny, hot as hell, and has the most adorable secret ever.
But there’s more to him than I imagined. The wealth he enjoys traps him; his father controls him. And he thinks I’m the key to his freedom.
I’m doing my best to convince everyone that we’re a couple.
But maybe I’d be wise to remind myself that we are not.
The Fake Boyfriends Debacle is the first installment of the Frat Brats of Santa Barbara series. It features two strangers falling head over heels for each other, a big, crazy family, an elite private school bustling with hot, adventurous guys, steam to make you sweat, and a grand happy ending that’ll make you swoon. You know you want it.
Heather's Review:
Hayden Hall knows how to write a compelling, steamy New Adult story and he proves it once again in The Fake Boyfriends Debacle!  This book kicks off with a very strong connection between two guys who aren't looking for connection and has them drift into a 'with benefits' relationship until of course they need to 'pretend' for Caleb's family and things continue to heat up in more ways than one...
This book balances the romance with the each characters history and circumstances and the pacing is fabulous... if you like to read about hot, smart college guys who deal with relationship, family and life angst in a cute sweet and steamy way, than you'll love any of Hayden Hall's college stories and you'll certainly appreciate The Fake Boyfriends Debacle!
Rating: 5 Stars
The Fake Boyfriends Debacle is currently available in e-book and paperback and can be read as part of your Kindle Unlimited Subscription
5 Stars College Fake Boyfriends KU New Adult One Night Stand Opposites Attract