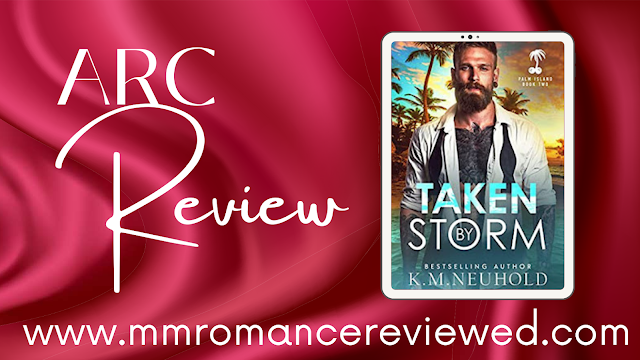 "I think it goes without saying that I am absolutely shit at relationships,” he goes on, and a surprising disappointment settles in my chest. I already know where he’s going with this. “Ditto,” I agree. '- Storm. 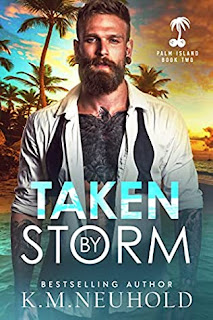 Chef Storm is moody, antisocial...and he just asked me to be his fake boyfriend.

Most people on the island avoid the hot-tempered chef, but he doesn't scare me. Sure, he's prickly, but I've also caught him feeding a stray cat, so I know there's more to him than the sky-high, barbed-wire fence he's built around himself.When Storm's ex-husband shows up unexpectedly during the off-season and refuses to go home, pretending to be Storm’s boyfriend is apparently my new job.

Faking it with my grumpy boss should not be this much fun, especially since the last thing I need is to make a fool of myself by falling for anyone else on the island.

Is there anything more exciting than being swept up in a storm? Maybe taming one…

***Taken by Storm is a grumpy/sunshine, sort of boss/employee, definitely fake boyfriend (except how fake is it if they’re ACTUALLY hooking up?), second book in Palm Island series where the residents of gay resort island get up to WAY too much fun once all of the tourists leave for the season. Each book can be read as a stand alone, but trust me when I tell you that you won’t want to miss all of these shenanigans.

I thoroughly enjoyed this new to me high heat fun read with a cast of quirky men on gay resort Palm/ Handjob Island where all the residents go by nicknames. I had to grin about the really lay back atmosphere and could picture the characters going about their life while relaxing and recharging.
Storm and Hennessey are Boss and employee in a local restaurant that is now closed in the off season. When Storm his ex-husband comes to the island in an instant he 'claims' Hennessey as his boyfriend who does not mind yo get 'benefits' out of it. Of course they find they have real attraction and have to decide what they do about it. Find out and get to know some of the quirky characters a little bit better. And let me just add that I am looking forward to more stories about this colourful group of men. 4,5* for this story.
Taken by Storm is the second book in the series and I just purchased book one to catch up. However this book can be read as a stand alone.

4.5-5 stars rounded up. I am loving this new series by one of my go-to authors, this is the second in the Palm Island series and I'm really enjoying it so far. If I'm honest I maybe preferred the first book but this one is great too. I was in the mood for something with some heat, and this has it in spades 🔥🔥🔥🔥
We met both Hennessy and Chef Storm briefly in the first book, and I liked both. Grumpy/sunshine is one of my favourite tropes and these two were just the best together. The chemistry was insane between them even though it took Storm a while to realise. This was also unexpectedly sweet, I didn't expect so much fluff but I was there for it. These two together were just so damn adorable, from playing cards together, to watching movies, to supporting each other, it was just everything. I love that we saw Storm's soft side with the cat (and now I REALLY need to know who wears the lace panties - we better find out 😉 )
In short this is hot, adorable, snarky, fun yet full of all the feelings and I loved it. I can't wait for more from Palm Island, and the ghost matchmaker.

Waiter Hennessey is just about the only person that can handle volatile chef Storm, however, pretending to be Storm’s boyfriend is making Hennessey have to fight all kinds of feelings. Both Storm and Hennessey believe relationships are not for them, but when they get closer they can’t deny the steam and actual friendship that grows. I wish there had been more background for both men and perhaps more time spent together communicating, but I really enjoyed that both characters were likable, caring and sweet with each other. Something about a story that has you finding love right under your nose is always so worthwhile.


Amy_tbs' Review:
Taken by Storm is the second book in the Palm Island series and features Chef Storm with his icy exterior and grumpy demeanor. He's our mysterious counterpart to Hennessy a flirty happy sunshine employee. After an unwanted visit from Storms ex husband, Hennessy is enlisted by Storm to play the part as his boyfriend to send the ex on his way.
Chef Storm and Hennessy are surely going be a recipe for disaster? In this fun, steamy grumpy/sunshine romance that features an underwear stealing cat and some inventive replacement for lube. There is also a cocktail of interesting and unique characters and some familiar faces from The Real Deal that make an appearance.
I highly recommend this series it's so much fun and I love K.M Neuhold's writing style.
Rating: 5 Stars

Heather's Review:
Once again, KM Neuhold has written a book that I couldn't put down... I'm just glad she writes novels instead of epics... Taken by Storm was the perfect blend of grumpy/sunshine, hurt/comfort and fake boyfriends - steamy, sweet and funny, with a bit of side character drama and an amazing tempo...  I absolutely loved Hennessey from book 1 and getting to know more sides of Storm was so much fun!
I do recommend reading these books in order, if only to understand the island lore and back history of the side characters whose stories are still to come... but if you're determined to read it standalone, you will still enjoy the story.
Rating: 5 Stars.
Taken by Storm is currently available in e-book, Audiobook and paperback and can be read as part of your Kindle Unlimited Subscription