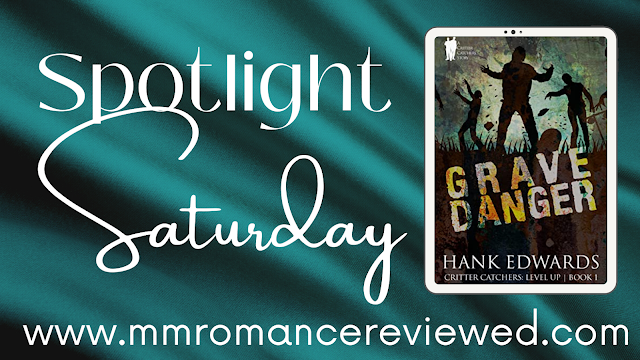 Today's Spotlight Saturday features Grave Danger, a recent release from Hank Edwards, a Paranormal Romance with an undead twist!  Check out the fun excerpt below! 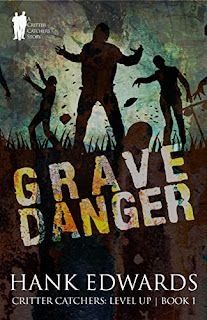 Things have been quiet for the Critter Catchers of Parson’s Hollow. Sure, married business owners Cody and Demetrius have critters to catch: raccoons, chipmunks, and the odd possum or two. But there’s been a refreshing lack of monsters.

Until Cody hits a man with his truck on a dark, lonely stretch of highway, and he’s shocked to discover it’s the town mayor… whose funeral they attended the week before!

Cody and Demetrius are back in the thick of things, this time trying to figure out why the dead in Parson’s Hollow won’t stay buried. The situation quickly takes an ominous and deadly turn when multitudes of the undead close in on them and those they love. While fighting for their lives, the Critter Catchers realize this time they’re going to have to level up their game to win.

Driving home from the Hollow Leg bar on a quiet, still night, Cody Bower ran over the mayor of Parson’s Hollow.

As he drove along Route 118, a winding stretch of two lane blacktop hemmed in on both sides by thick woods, his happy whistling was interrupted by a man lurching out of the trees into the path of his truck. He caught a momentary glimpse of the man’s face and registered a flash of recognition before shouting, “What the fuck?” Jerking the wheel didn’t help as much as he’d hoped. The passenger side of the truck took the impact, and the tires on that side thumped over the man.

Jamming down the brake pedal, he skidded to a halt, the backend fishtailing along the road. Once the truck had come to a stop, Cody hit the emergency flashers button and stepped out.

The night was clear but dark. The moon had yet to rise, and the town didn’t have funding for streetlights this far out. Only his flashing taillights illuminated the road, pulsing a sinister red glow across the figure lying a dozen feet away. They pushing deep shadows into the spaces between trees crowded close to the gravel shoulder. He approached a few feet, then stopped. The taillights blinked with a steady red intensity. Cody had trouble breathing, and his body had gone cold as his mind thrummed with shock. What the fuck had he done? It hadn’t been his fault. The guy—it looked like the mayor, but that was fucking impossible—had walked right out in front of him.

Whatever had happened, a rational part of Cody’s brain was certain it couldn’t be the mayor lying in the road. It had to be someone who resembled the mayor. High ranking city official or not, the truth of the matter was Cody had definitely hit him, run over him in fact, and he absolutely felt like he was going to be sick.

A sudden movement from the body made him jump and take a step back.

Another movement, more pronounced than the first as the man pulled an arm in close, dragging it along the road with an eerie scraping sound. It stopped at the side of his chest, and all was silent again. Then Cody watched in horror as the man slowly got to his knees, his movements jerky and awkward, painful to watch. The steady flash of red light showed the damage to the side of his head and face, and he held his left arm at a strange angle. Cody’s stomach twisted into a brutal knot that threatened to expel the burger, fries, and two beers he’d had at the bar with Jugs. He was thankful he’d stopped drinking when he did so he wouldn’t blow past the legal limit when the sheriff’s deputies eventually showed up. Swallowing past the lump of fear in his throat, Cody took a step toward the man.

“Hey, buddy, you okay? I’m really sorry, I didn’t see you. Jesus, you came out of nowhere. Like, literally, nowhere. There’s just woods out here, and I wasn’t expecting someone to come walking out in front of me in the pitch dark.”

The man unsteadily rose to his feet. His dark suit was torn in places and splattered with what Cody hoped was mud. A dirty, frayed tie hung askew from his neck. He stood swaying slightly and staring out into the woods across from him. With a sudden movement that made Cody jump, the man took a shaky step toward the dotted yellow center line. His left arm swung like it might no longer be attached at his shoulder, and Cody feared losing his dinner if he saw that again. Then the man cocked his head, twitched it around on his neck and fixed him with a look. A rattling shudder of recognition and terror ran through Cody.

This was definitely George Clarke, the mayor of Parson’s Hollow. He’d run over the mayor of their town. That in and of itself was a terrible, awful thing. But even more upsetting was the fact that a few days ago, he and Demmy had attended the mayor’s funeral.

Grave Danger is currently available as both an e-book and paperback!