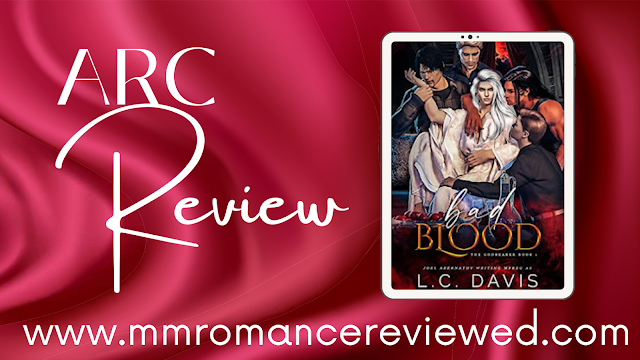 Joel Abernathy writing as L.C Davis introduces The Godbearer series in Bad Blood.
From the blurb:
The bitch is back.
It's me. I'm the bitch. And thanks to my traitorous bestie Sarah's vampire cult having a funny definition of "virgin sacrifice," I'm back from the dead rather than back from a much-needed vacation in Cancun. 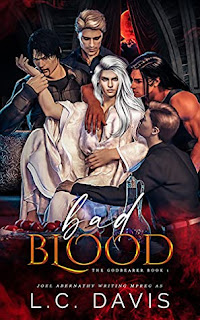 Now I'm possessed by their snarky deity, and my afterlife depends on keeping it a secret from her cult of four reincarnated vampire lovers. Budget Edward—I mean Cyrus—and his way more obnoxious twin, Cameron, are at the helm. Then there's Sam, the guy I thought was my friend, who apparently takes backstabbing way too literally. And because things just couldn't get any shittier, my soon-to-be ex-boyfriend Alex is involved. Ex-alive, that is.
They say revenge is a dish best served cold, which is perfect considering the frosty new powers at my disposal, but I think I took it a little too far. When my plan goes sideways and all I get is the attention of a hunter, the cult doesn't try to kill me a second time. I fall under their unwanted protection instead, and they claim I belong to them now—body and soul. And it turns out hate—and heat, which is a whole new experience for me, just like being with a guy is a whole new experience for them—spices things up.
Are enemies with benefits a thing?
Author's note: Bad Blood is the first book in an MM Vampire Romance series that follows the same main character with multiple love interests. He won't have to choose between his men to get his HEA, and there is eventual male pregnancy in this series.
Jacquie's Review:
First of all - that cover! Gorgeous! I kinda want it as a print it's that pretty to look at.
Bad Blood is a highly addictive read, so much so that I had to put it down for a bit to get anything done, otherwise I'd have finished it in an afternoon. With everything that pulls at my attention - this is a big deal.
I love the world that's being built with the supernaturals and especially Chase as a character. He just was so sassy but smart too. I really felt for him at the start and wanted to protect him and felt he was totally justified in his actions.
The bad blood between them all isn't resolved in this book but there's still steam, for reasons I won't go into for spoilers, and I loved that too.
We get povs from each of the guys too, which was useful to give another perspective of Chase and the story.
A fascinating read and a mild cliffhanger.
Rating: 5 Stars
Reds Book Reads Review:
Bad Blood is just so good and so far beyond what I expected. I adored it.
I loved the whole concept of this book and it was so much more than I was expecting. It was great to get such a twist on the paranormal genre and this was something I hadn’t seen before.
Chase was just so sweet and at parts this book were just heartbreaking and you really feel for him. It was great to watch him get stronger as the book progressed as well. And oh, that ending! I really wasn’t expecting it and I can’t wait for book 2 to find out where the story goes from here!
Rating: 5 Stars
Miki.J's Review:
This is the first book I've read from this author and it's really really good.  It did take me a bit to get into the swing of the storytelling, but after the first chapter - it totally sucked me right in.
Who says revenge isn't sweet !!!  Yes, the MC is young and I really did feel sorry for him - and when I read the bit "his heart fractured", so did mine.  The story is told from mainly from Chase's POV but there are some chapters with POV from other characters and in no way is it disjointed.
As you keep reading, more layers/tibits are revealed, along with plenty of twists.
This book does carry the enemies to lovers vibe but it's not resolved in this book - awwww heck no!!
(They keep saying they don't care.....hmmm... methinks they doth protest too much.....)  And that ending - bahahahaha - I just hope Chase gives them heaps, I really really do !!  Definitely will be continuing this series !
Rating: 4 Stars
5 Stars Cliffhanger Enemies to Lovers Jacquie Miki J MPreg Paranormal Reds Book Reads Series vampire