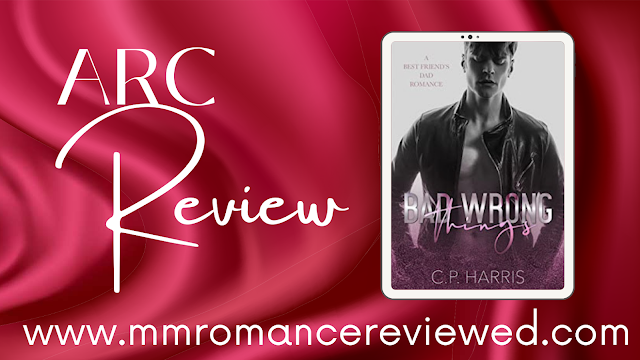 C.P Harris writing is like poetry and her words envelope you in torturous heartbreak, before slowly feeding those broken fragments back to you piece by piece.

From the Bad Wrong Things blurb: 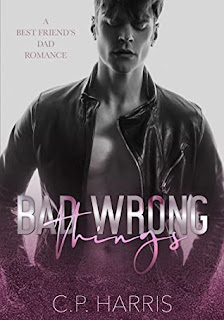 One summer to see it through.

One explosive love fueled by mutual obsession. The day Clint sees his son, Joey, off to basic training, the young man he’s devoted his life to extracts one promise from him: spend the summer doing something selfish for a change. The request seems harmless enough until Joey puts his best friend, Raven, in charge of seeing it through.

Raven would do anything for the people who took him in as a teen, and, when it comes to Clint, anything comes without limits. When encouraging Clint to explore his selfish side reveals Raven’s love for the older man, Raven is shocked to discover his feelings may not be unrequited. Not only are they returned, but all his darkest, most hidden desires have finally found their match.

Clint’s possession feeds every craving Raven’s ever known. Raven’s openness provides Clint the freedom he’s longed for to take whatever he wants, and soon boundaries are abandoned at the bedroom door. As summer’s promise bleeds into winter, and the threat of Joey’s impending return looms over their heads, Clint and Raven love faster and harder.

When Joey’s disapproval ends up being the least of their concerns, Raven and Clint go to desperate extremes to stay close because something is better than nothing. Facing an uncertain future, both men are left wondering if you can ever go too far or risk too much and still come out on the other side whole.

Bad Wrong Things is an age-gap, best friend’s dad romance with two possessive MCs and themes of hurt/comfort and second chances. Both MCs are consenting adults and eventually get their hard-earned HEA. Use the look inside feature for trigger warnings

🔹“We’d sped past dirty without a backwards glance. we wanted to be stripped of all humanity when with each other.”🔹 : Bad Wrong Things By author C.P. Harris Is a voyeuristic divulge into an obsessive love that will burn all in it's path until there's nothing left but embers and ash! Raven and Clint's love will probably stay with me until the end of time. It was all consuming! I almost felt like a deviant looking in on this love that was so pure and unadulterated but inadvertently engulfed everything good. This no holds barred story of two people enamored with eachother to the point of destruction. This is a age-gap, best friend's dad romance, with dirty talk that will make your toes curl. There is high intensity heat. With scorching sexual role play that pushes the boundaries of consent. These two insanely jealous MC's will make you want to fight their corner and reprehend them all at once! 🔹“I need to touch your bones,” he said, palming my sternum, getting comfy. “I can’t get deep enough inside you, or close enough to you. I want nothing in our way. Not even skin.”🔹 🔹“We enabled each other. We were our own referees, and our judgment on what constitutes a foul was biased at best. At worst, we simply didn’t care. The more flags, white or red, the merrier.” 🔹

I had the most highlights I've ever had with an ebook by the time I was done with Bad Wrong Things. There were just so many moments I needed to save.
" Promise me. And if you can't promise me all those things, then please, lie to me."
Clint saved Raven when he was just a kid. He welcomed him into his family like he was always meant to be there. The same can be said for Clint's son Joey who was around the same age. Raven became his brother and together they formed a tight friendship. The three of them were a unit, a tight knit family who would do anything for each other. It wasn't until Raven got older that his hero worship for Clint turned into something else. He'd always loved Clint, but Raven couldn't deny that the love he felt for him now was anything but familial. It was the kind of love that consumes a person. It was want and desire. Clint had no idea what he was in for. Then again, neither did Raven I think.
"Raven hid to be found. He ran to be caught...It solidified for him that he was worth the effort it took to chase him."
Their love started out beautifully. It came from a place of light. But then secrets caused that light to dim. Guilt twisted their love into this obsessive and toxic mess that neither MC could recognize anymore. I honestly needed to take breaks in reading at some points because I didn't think my heart could take any more hits. No matter how lovely this book was written, it didn't stop it from being devastating as well.
"I didn't want to be fixed, I wanted to be loved for my brokenness."
With all that being said, I promise this book is worth the pain. Clint and Raven's ending is worth every tear shed. It's an emotional journey for sure. I spent days thinking about this book. I'm not even exaggerating when I say I laid in my bed that night after finishing and couldn't sleep because my brain needed to process. The word book hangover was invented for reads like this. It deserves every one of those 5 stars and I highly recommend it.