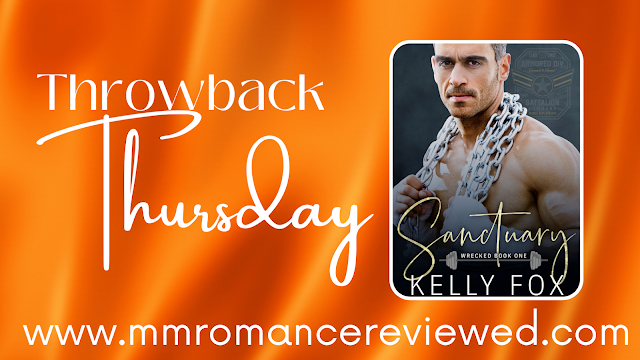 Sometimes you just need a book that has a gym full of ripped men wearing tight shorts lifting heavy objects, especially when it's a delicious military romance from Kelly Fox... I bring you an excerpt today from Sanctuary, which originally published two years ago and kicked off the amazing Wrecked series! 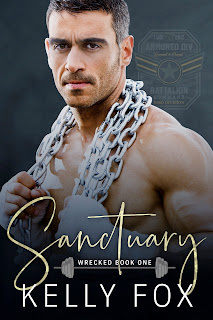 What's the first rule of running a gym by and for combat vets?

Enjoy the scorching hot scenery but get your kicks somewhere else.

Never mind that my cousin-slash-business partner ignores that rule every chance he gets. I don't ignore it. Ever. And frankly, between Grindr and living in one of the gayest cities in America, it's not exactly a hardship.

That is, until a pair of blue eyes swimming with vulnerability shows up at my door, looking for a job. He's too skinny, too mouthy, and way too young for the likes of me, but he pings that protector instinct in me, hard.

I want to fix whatever put that lost look in his eyes, but to manage that, I'd have to do the one thing I said I'd never do.

Break my own rules.

“A very bad idea,” I say, smiling even though I’ve just figured out exactly how much trouble I’m in. There are far too many doubts and monsters in Elijah’s blue eyes, and a wariness that hurts a place inside of my chest. I want to wrap him in high-thread-count blankets and protect him from whatever’s put that sadness into his eyes. Fucking lock your shit down, jackass. He’s your employee, not your fuck buddy, and not your project. Fuck’s sake, try for some fucking decorum.

Snapping out of my fantasy montage, I remember my surroundings. “Hey, I’ve kept you long enough. Let me get all of this shit cleaned up.”

We both hop up, and the smallness of the space means that in order for me to reach the sink, he has to turn to the side to let me pass. The smell of the gym’s shower gel on his skin gives me the almost overwhelming desire to trap him against the counter and kiss him until his mouth is swollen. I subconsciously take a half step in his direction, brushing against his shoulder. Thankfully I course correct and veer toward the sink before I put my hands on that tight body of his.  What the fuck am I doing? He’s my employee.

“Sorry, tiny kitchen.” We lock eyes for a second, and I sway, microscopically, in his direction before pulling myself back.

“N-nah. It’s just cozy,” Elijah responds breathlessly. I nod and take a full step back, gesturing for him to go past me, which he does a little too slowly for my sanity. I swear I don’t know if his hip grazed my junk or if I accidentally air-humped him. I wait for the sound of the closing door before I lean forward on the kitchen counter, my forehead on the cool marble.

Fuck decorum. I may have resisted the urge to push him down against the nearest flat surface today, but I have a bad feeling that at some point I’m going to end up burying myself in his luscious ass.