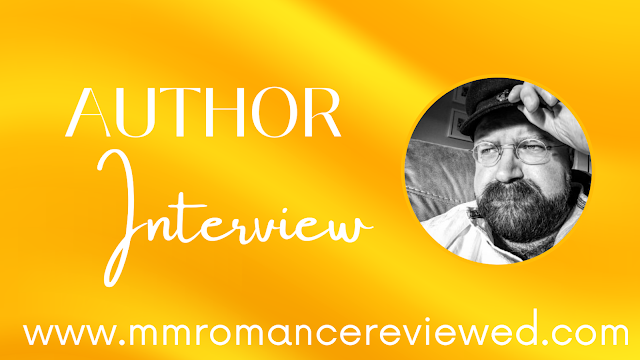 Today I got to sit down and chat with author Glenn Quigley whose historical fantasy trilogy has a strong m/m romance plot, about his books, writing and more!  Let's jump right in!

Indie or Traditionally published? - Tell us how this works for you...

I am published with Ninestar Press which is great because of the amazing editors I get to work with. They spot all of my many, many mistakes.

I tend to start either with a single scene that I expand on, or with a character whose arc I roughly sketch out very early on. Usually it’s a bit of both, actually. I’ll get the idea for a single scene, figure out who is in it, then build a character arc (which evolves over the course of figuring out what the story actually is.)

I find casting actors as my characters is a handy way of building up a reference library of looks and physical details, and helps me to keep everything consistent. Often, the characters will expand beyond that, but casting is a good starting point, I think.

My first published anything was THE MOTH AND MOON, a historical fantasy novel. It’s about Robin Shipp, a burly gay fisherman who lives on a tiny island and the storm that changes his life. The story all takes place in one little village where everyone knows everyone else’s business, so it’s got a big cast of characters but a cosy feel. The MC is an overweight, middle-aged man who’s a bit of an outcast. Though the story revolves around a storm and the secrets it uncovers from his past, at the heart of it is Robin dealing with a messy break-up from his partner, Duncan, and his friend Edwin dealing with some possibly unrequited romantic feelings.

The Moth and Moon books (it’s a trilogy) are set in a world without religion, where no one faces prejudice for their sexuality or gender identity so they’re a little different from what you might expect. I really didn’t want to write stories where people were attacked for —or had to hide — who they are. 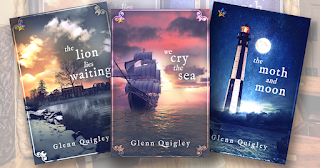 My most recent is a novel called WE CRY THE SEA, which is the third book in the Moth and Moon series. When I first started writing, I had no idea that I would end up with a trilogy but the story just kept growing and evolving in unexpected ways. The plot is split between Robin at sea looking for answers about his own past, and Duncan back home on the island. The main romantic focus shifts to Duncan who finds himself the object of affection of two different men, both newcomers to the island. One is the new school master and the other is both a former criminal AND Duncan’s ex-lover’s brother. So, lots of complications for him to iron out, there!

I also have a contemporary short story coming from Ninestar Press later this year. It’s called USE AS WALLPAPER and is about a reporter travelling to a small village in the Caucasus Mountains to make a documentary about a polyphonic choir. There he meets a gruff choirmaster and the sparks start to fly…

Part-time. I would gladly pivot to writing full time if I could!

Robin Shipp is rarely far from my thoughts. He likes to pop up and say hello every now and then, though more often than not he reveals something about his past that I didn’t know. Almost like he’s trying to get me to write another book about him…

I write in my spare bedroom/office. I work in the mornings and write in the afternoons. I like a bit of peace and quiet so I stick on my favourite ambient background noise (a crackling fireplace with thunder, rain, and wind sounds) and write as much as I can. Sometimes it’s a little, sometimes it’s a lot. But every bit helps.

I have written a couple of contemporary short mm romance stories that I’d like to get out at some point this year. I also have a new novel coming from Ninestar Press which is a spin-off from my Moth and Moon series. I’ve got a few short stories that are tied to the world of the MOTH AND MOON that I’d love to release as a collection sometime.

Honestly, for me it’s remembering that I’m not repeating myself. My characters tend to always be big, burly, bear-types so sometimes I find myself wondering if I’m just covering the same ground again, but then I remember that there are a bazillion stories about young guys with six-packs so the world can handle a few more yarns about men with big bellies!

My parents. My mother is the one who got me into writing from an early age and encouraged me to keep at it. My dad has been known to sell copies of my books to people he’s just met on holiday!

I’m not sure, I think it’s just how the stories evolved. They type of men I write about are rarely the focus of stories. They tend to be comic relief or background grunts/henchmen and I always felt they should have their turn in the spotlight. There’s usually a relationship at the heart of my stories, be it burgeoning or established, and I think they form an anchor to hold the plot in place.

I find history documentaries often spark off ideas. Some little throw-away detail or visually interesting image will get me thinking.

I’ll be starting a series of biographies and portraits of the characters from the world of my books which you can see on my website: www.glennquigley.com

And I have a weekly newsletter with writing updates and art from the world of my books. You can sign up for it here: www.glennquigley.com/newsletter