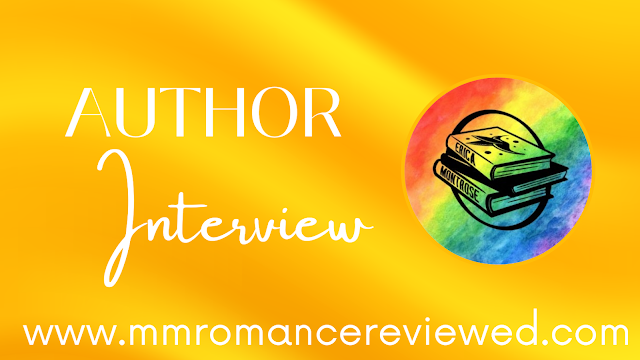 One of the things I love about having the blog is the chance to connect and share resources with new authors!  I can't remember exactly how Erica and I started chatting but we ended up going back and forth about so many topics and it ended up with me helping to admin her Facebook group - which you should all join after reading this interview... but for now, let's chat...
Indie or Traditionally published?

When I was in college, the only way to get a book made was via Traditional publishing. Understandably, it was a competitive and discouraging process, so I felt like it wasn’t worth the effort to try. Now that Indie publishing is relatively easy, and there is so much support for new and established authors alike, I’m encouraged to get my stories written and shared for readers to enjoy.

I attempted being a plotter to start with and found myself fighting with my characters to the point I was getting frustrated that the story didn’t flow and I wasn’t telling the story I wanted. I put that manuscript to the side for later.
My second attempt was less structured, with plot points I wanted to follow but no real thread on how to get the characters from Point A to Point B. I was delightfully surprised to find that the characters found the connections for me, and the story just flowed. I’m following that same process with subsequent books.
Every idea starts with a story hook, what is it I want to convey to my readers?
Then I sketch an outline of the major plot points, possibly scenes I want to include.
I muse a little about what my characters look like, how they act, what personality traits they have and even how they dress so I have a firm idea of who they are when I start writing.
Lastly, as I come across details I need to include, like family, history, past experiences etc., I jot them down in a notebook to refer back to later.

Tell us about your first published M/M fiction/romance…

I was at GayRomLit in October and was so inspired by the authors and readers I met that I thought I’d try my hand at writing. The day I returned home I was thinking about typical romance novel tropes and wondered what would happen if I were to flip the rich/poor trope on its head - How could a millionaire be poor, how could a poor guy be wealthy? Edwin and Liam’s story came from that.
Between mid-October Halloween, I had the first draft written. Early November, I’d sent the manuscript to the editor. By early December I had input from a couple of author friends and the edits done by Christmas. The cover art was completed mid-January and  As Much As I Try went live on Amazon on February 4th!

…and then your most recent one.

I’ve got a couple of stories in the works at the moment; one for the New Author Giveaway another Facebook Group is hosting on Prolific in June about a college professor and a student who’s an indie author.
The other work is the story between a former ballet dancer and a safety manager that includes a scene where they’re stuck in an elevator.

For now, writing is a part-time hobby for me. I work full time in a corporate office, but always have my notebook nearby when inspiration strikes. My husband and kids just laugh when I start scribbling during dinner or talking about book ideas in the car.

You’d think, with my degree in Writing, that I’d invite historical authors or influential writers. But honestly, I’d love to have a relaxing meal at a cozy restaurant with the writers I’ve been recently inspired by: Merry Farmer, Sam Burns and W.M. Fawkes (because they write together), Sally Malcolm, and Eliot Grayson.

Something people would be surprised to know about you?

I spent my formative years in Europe. My dad was in the Air Force and I spent from age 11 to 17 in Germany and Holland. I’ve been very lucky to see things that many people only get to see in movies and tv.

There are too many and I go back to previous books to relive the couples’ stories fairly often.

Most of my writing happens on my living room couch. I prop my laptop on a pillow on my lap, let my mind relax, and just let the words come. Then, I’ll print what I’ve written and take the classic red pen to it, then sit at my desk to document the edits.

The nice thing about indie publishing is that I have no deadlines, no real goals. For now, I just want to write the stories as they come and publish them whenever they’re done.
If I had to give specifics, I’d like to have three books out by the time GayRomLit comes around in October.

What else do you want us to know about  you?

I have seven tattoos and am always planning to get more.
We have five cats and two snakes in our household
I got my degree in Writing, but I spend most of my time writing corporate policies and procedures
I have a pottery kiln in my basement

Honestly, I don’t think I’ve written anything really funny yet!

The friends I’ve made with other authors are the people that encourage and support me when I’ve been unsure of my talent or ability to actually publish what I’ve written.

I started reading fanfic on AO3 of a gay couple in the online video game I play. (World of Warcraft) I wanted more, so a friend referred Jordan L. Hawk’s Widdershins series to me, and I devoured it.
It didn’t take long to realize I found much more satisfaction in m/m romance than m/f romance, mainly because the romance didn’t overshadow the plot. The characters were truer. The absence of gender dynamics was refreshing. I haven’t read anything else for the last 18 months.

When I decided to write, I knew I wanted to tell stories I wanted to read, which were all m/m.

Inspiration comes from everywhere for me. Dreams I’ve had, the possibilities in flipping tropes, writing prompts from some of the Facebook Groups I’m in all lend themselves to ideas. Sometimes, it’s a character idea that prompts a story - who would they fall in love with? How would that happen?

It’s happened often, even though I just began writing, so I’ll switch hobbies for a bit. I’m a crafter, so I’ll paint pottery, sew, draw or putter around with whatever catches my whim at the moment, then go back to writing a spark of inspiration hits and gets me excited to write again.

My immediate family and close friends know, but I won’t tell my extended family. They’re pretty conservative and I prefer to avoid the potential judgment and conflict completely.

The love stories. The dynamics between the characters and watching them fall in love. That always makes me happy at the end of a book.

How can we connect with you?
I can be found on my Facebook Group - MontRoMMancers, and via email at erica.montrose.romance@gmail.com .
Author Interview