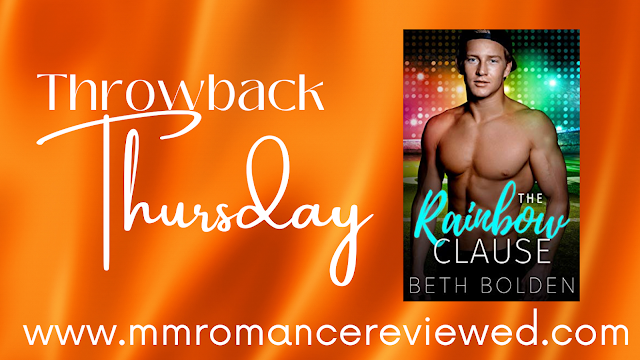 So excited to be helping Beth Bolden celebrate 5 years of publishing with a look back at a delicious excerpt from her very first book, The Rainbow Clause!  Two very special things are happening this weekend with the book, first off, it's FREE all weekend (until Monday, April 4th) AND there's a big party celebrating all things Beth Bolden with these amazing authors in Beth's Boldest Facebook Group! 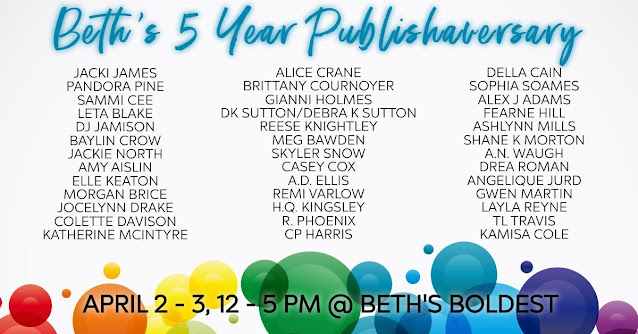 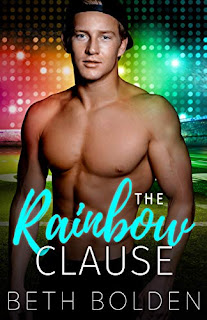 Don't like the athletes. Don't sleep with the athletes. Don't fall for the athletes. It had never been particularly difficult to keep the rules but Nick had a feeling he was about to be tested.
Heisman winner. Member of the National Championship team. NFL Rookie of the Year. Quarterback Colin O’Connor knows he’s become the ultimate romance novel cliché: all the success he’s ever dreamed of but nobody to share it with. Too bad it’s not as simple as asking out the next girl who intrigues him – because the next girl to intrigue him probably won’t be a girl at all.
Unexpectedly, the solution comes in one neat package: Nick Wheeler, lead journalist for a leading sports and pop culture blog. Hired by Colin’s team, Nick comes to Miami to shine a spotlight on the NFL’s most private quarterback.
The heat in Miami rises when Nick discovers that Colin is nothing like the hollow personality he pretends to be in interviews and he’s even hotter in person than on his Sports Illustrated cover. Nick knows this is the story of his career, and it also hits close to home. What he needs is to help Colin share his story while keeping their growing relationship from boiling over in the press, but what he wants is to tell the world.
Excerpt:

“You didn’t really like it tonight at the club,” Nick stated.

In the dim light, he watched as Colin shrugged. He hadn’t taken his eyes off the horizon, but ever since he’d walked outside, Nick couldn’t take his off Colin. “It’s not my type of thing.”

“Why do you let Mark push you?”

Colin glanced over, the shadows obscuring the details of his face, but Nick imagined he saw frustration in the hardening curve of his jaw and in the depths of those blue eyes. “I usually don’t,” he admitted. “But sometimes it’s easier to meet people’s expectations than to constantly flout them.”

Nick pondered this, and while his sleepy brain was still trying to process Colin’s words, he continued on. “And,” he said, his voice growing wry, “I didn’t want you to think I was some sort of recluse.”

It shouldn’t have, but it heated Nick right up that Colin apparently cared what he thought of him. He was trying to work with the assumption that his feelings were still one-sided enough that nothing would happen. But that assumption was rapidly falling to shreds.

“I don’t think you’re a recluse. But we don’t have to do things you don’t want to do, either. What would you rather have done if we didn’t go to Hibiscus? I’m assuming you have places you do like to go?”

“Of course. They’re just not…” Colin trailed off and then shrugged again.

Nick walked over to where Colin was sitting on the lounger. Every molecule was screaming at him to stay away if he wanted to keep things platonic between them, but he needed to have enough self-control for this. Because somewhere along the line, someone had convinced Colin that he wasn’t the “right” kind of person to be who he was, and he needed to understand that was just plain bullshit.

Nick gingerly sat at the end of the lounger and when Colin lifted his eyes to look at him, his face was finally out of the shadow. Perfect. If he could only ignore the way Colin looked and sounded and even smelled. How did he smell so clean after a night of dancing and drinking? Nick was sure he smelled like a locker room full of flop sweat and too much booze.

“Listen, you don’t have to do what everyone expects. Even if it’s easier. Especially if it’s easier.” Nick inched closer and tried to ignore the desperate pounding of his heart at Colin’s nearness. If he moved half a foot closer, he’d be close enough to kiss.

Kissing was definitely not what Nick needed to be thinking about right now, especially when Colin’s expression was still skeptical.

Nick changed tactics. “Do you know what they call weird people if they’re rich? They don’t call them weird. They call them eccentric. Money and success buys you the ability to break the mold. You can do whatever you want. You’re about to change your whole life. Embrace that you’re different. Stop apologizing for it.”

It was slow, but the doubt on Colin’s face had begun to melt a little. Nick prayed a little and threw his Hail Mary. “The first time we met, you told me that your personal role model wasn’t Tom Brady. It was Nelson Mandela. That’s you, that’s not the cardboard cutout the media wants you to be. Be you. Trust me, you’re a hell of a lot more interesting than the cardboard cutout Colin O’Connor.”

“But you’ve always been easy to win over,” Colin smirked, echoing that first interview. Nick had to swallow down the lump that had grown in his throat, because Colin had insisted he hadn’t remembered that interview. But maybe some of it had come back.

“True,” Nick said. Anything else was a complete lie. He’d been easy to win over from the first moment. The easiest, probably.

Dawn was beginning to creep over the sky, and Colin looked contemplative. But instead of continuing their conversation, Colin changed the subject. “I’ve got to go to the practice facility for a workout this morning. Do you want to come?”

“Will I miss anything?”

“Me doing a hundred reps?”

Nick laughed. “I meant for the story.”

Colin looked very amused. “Then, no.”

“Okay, I’ve got some research I promised to put together for a co-worker. So, I’ll let you sweat your brains out alone this time.”

“Then tonight,” Colin said casually, “I’ll take you out.”

Nick’s brain short-circuited before he remembered that he’d asked Colin to take him somewhere he liked. It was absolutely, definitely, not a date, no matter what it sounded like.

“Sure,” he said, trying to keep it casual and his own hopes buried somewhere in this is a very bad idea land. He got up off the lounger and started to make his way into the house.

But before he made it inside, Colin’s voice rang out across the terrace.

“You’re wrong, actually. I didn’t have a terrible time tonight.”

Nick knew he should go into the house and shut the door. He shouldn’t listen to the rest of this, because the walls between them were crumbling fast enough without Colin pulling them down. But somehow his feet rooted in place and he couldn’t move. “Oh?” he said, because he was a fool who apparently couldn’t keep his mouth shut.

“I liked dancing with you.” Nick watched, words shocked out of his own mouth as Colin swaggered by into the house, smug smile plastered on his face.

The Rainbow Clause is  FREE all weekend (until Monday, April 4th) and always free to read on Kindle Unlimited!
AND don't forget to join Beth's Boldest Facebook Group and party like its 2017!
#TBT #ThrowbackThursday Excerpt