Leashing His Heart released today and Adara Wolf stopped off to share this excerpt with us!
From the blurb: 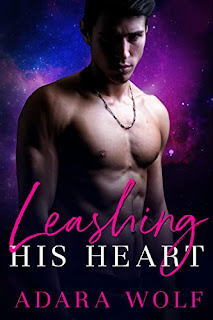 Emil never expected to get caught for his crimes, and he didn’t expect to end up as a bondservant to one of the richest families on Cadmus Station. He’s willing to play nice, but he refuses to be submissive—there’s nothing submissive about him.

His new master is cruel, but he’s inept and inexperienced. Emil can see all the cracks in Johan, and he’s going to take every advantage he can get to gain the upper hand.

Leashing His Heart is set in the Under His Heel universe but can be read as a standalone.

“You clean up nice,” Emil said, grinning. “But I bet you knew that already.”

Johan scowled at him for a second before saying, “Strip.”

“You heard me.” Johan straightened his shoulders and lifted his chin, the same way his mother did. “Strip, right here. You’re my bondservant, right? And your contract says you’re open to sexual services.”

“I’ll get cold,” Emil pointed out. “We’re not exactly on a warm beach. Which, have you been to the beaches on Pylos? I used to go a lot and I’m desperate for another beach vacation. Think your parents would buy me a ticket once this is all done?”

“Stop stalling!” Johan snapped. “I can turn up the thermostat, but just get fucking naked.”

Or what? Emil wanted to shout back, but he knew what the consequences were. Johan's mother had been really fucking clear about that.

Fine. If the kid wanted to do some stupid sex games, he’d deal. Emil pulled his shirt off first, showing off his own muscles. He wasn’t the kind to hit the gym every day, but he knew the dangers of getting complacent on a space station. Muscle atrophy was one of his nightmares, so he made sure he got enough proper exercise.

It seemed like Johan appreciated the view, from the way his eyes honed in on Emil’s arms and abs.

Emil kicked off his shoes, then slowly pushed his trousers and underwear down.

He knew the exact moment Johan spotted the tattoo: his eyes widened and his mouth parted, and oh, that delicious little swallow. It never got old, watching people’s reactions to it.

Once he was out of his clothes completely, Emil folded them carefully and placed them on the kitchen counter. Then he casually widened his stance and smirked at Johan. “Happy now?”

He expected Johan to ask the usual questions. Did it hurt? or Does the design mean anything? Because even people who were into body art wouldn’t usually tattoo their genitals. That was reserved for the hardcore people who didn’t have any more empty skin left, who’d filled the canvas of their body completely.

Emil only had that one tattoo, winding around his cock, a ribbon with their solar system patterned onto it. It ended somewhere under his pubic hair, space expanding out if he ever bothered to shave again.

“What the fuck is that?” Johan asked. “Did my mom know you had that?”

Emil’s amusement was instantly doused. “Of course she knows. They documented all of it at the bondleasing center. Gotta make sure they know what state my body is in before they let somebody else have a go at it, right?”

“Is that all? Is your hole tattooed too?” Johan took a few steps closer before making some strange hand gesture. “Turn around and bend down, hands on your ankles.”

“Just bend over.” Johan’s expression hardened into something that didn’t suit him much. “You signed up for this. It’s a full-service contract, which means I can use your body however I want.”

“Thought you didn’t want a bondservant at all,” Emil countered, taking a step in Johan’s direction. He was taller than the kid, and he didn’t miss how Johan tensed up when he approached.

“I don’t. But I was thinking. If I have you here anyway, I might as well make use of you. So. Bend the fuck over.”

Emil had a sense that he could push things further, that if he tried, he could really freak Johan out. Something about how he tensed up, how he’d acted earlier.

But he should save tricks like that for later, when he really objected to something Johan wanted him to do. It wasn’t worth antagonizing him yet.

“Fine.” Emil turned around and reached down to touch his ankles, as requested. He made sure to spread his legs a bit too, properly showing off his hole.

He heard Johan’s sharp intake of breath, and he watched from between his legs as Johan closed the distance between them.

“Don’t call me that!” Johan snapped, slapping Emil’s ass cheek. “I’m the one in charge here.”Keep telling yourself that, Emil thought.
Get your copy of Leashing His Heart - it's currently available in e-book and paperback and can be read as part of your Kindle Unlimited Subscription
Promo