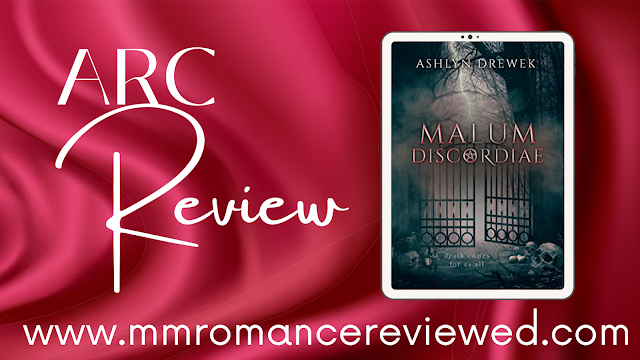 Attraction - turns to hate - turns to like - turns to love. Can a new, young love break the feud between two ancient witch families? Or are they doomed to repeat their ancestors mistakes?

From the Malum Discordiae blurb:

Like all Necromancers, Cassius Corbin grew up knowing one irrevocable truth: death comes for us all. It was a lesson he learned well when his mother was murdered by fellow witches. Six years later, he is back in the town of Winslow, Massachusetts to attend Tennebrose University. But that's not the only reason. While he’s home, he intends to track down a magical folio stolen from his family centuries ago. Once he finds it, he'll finally be everything the witches in Winslow fear and the Corbin name will be respected once again — as long as Graeme Hewitt, the son of his family's archenemy, stays out of his way.
As the first weather witch born in a century, the witches in Winslow demand great things from Graeme Hewitt, despite his thoughts on the matter. He’s supposed to be their future, but all Graeme can think about is the past — until the infuriating Cassius Corbin returns. In spite of the blood feud that has raged for centuries between their families, Graeme finds himself in the unfortunate situation of needing Cassius’s help. Six years ago, Graeme’s little brother also died and Graeme wants the truth about what happened that day. So who better to answer his questions than the son of the woman who murdered him?
Malum Discordiae is a dark, paranormal MM romance about witches, Necromancers, and a blood feud that has lasted centuries. It is a standalone book of about 117K words.
Content Warning: This book contains references to animal cruelty, alcohol/drug use, death of children, murder, suicide, and dubious consent. Reader discretion is advised.

In the town of Winslow there have been generations of magic families, living alongside non-magical humans, some of the witch families getting along and others being enemies for centuries. Necromancer blood witch Cassius returns to Winslow to attend college and to return his family to greater power by finding the missing piece of an ancient grimoire. When Cassius first meets Graeme he has no idea that the guy he is attracted to is a weather witch, and the son of the man who murdered Cassius’s mother. So begins the conflict between Cassius and Graeme which stir up feelings of hatred and lust between them, and a dive into the history of their family feud while trying to avoid liking each other.

An entertaining read, with elaborate world building throughout the story, details were provided slowly to build suspense and tension, and some things were not always clearly explained, so that was slightly frustrating at times. I enjoyed the banter and steamy times between Cassius and Graeme, and appreciated that the family antagonism was not automatically resolved between them but took time, communication and trust before they could accept their affection for each other. A paranormal mystery with action, a large interesting cast of secondary characters, and two young men meant for each other, I couldn’t put the book down.

Rating: 4.5 Stars
Jacquie's Review:
Malum Discordiae is my first book from this author but not my last.
From the get go I was hooked on Cash and Graeme. There was a strong Romeo and Juliet comparison, but unlike that story, I loved this!
They had reasons to hate each other but they were drawn together and couldn't stay apart. The chemistry between them was electric even as they traded barbs.
Even when they gave into their feelings there was still antagonism and affection between them that was a delight to read.
While I figured out part of the story, I was pulled along and taken in a different direction initially, so it never got dull.
Absolutely would read again as I'm sure there are layers to this that I missed - it's just that detailed
Rating: 5 Stars
Amy_tbs' Review:
🖤 “My only love sprung from my only hate, Too early seen unknown, and known too late! That I must love a loathed enemy.” Romeo & Juliet 🖤
✨ “Astra inclinant, sed non obligant — The stars incline us, they do not bind us.” ✨
🥀 He was like a snake in the garden — his beauty lured you in, then a fucking viper leapt out when you least expected it. 🥀
Four founding families, century long feud's and star-crossed lovers give way to a plethora of hexes, seances, Grimoire's, Demons, murder, vengeance, betrayal and deceit.
The stars have aligned and a true love has been born but will it survive a feud forged from hate?
Step into a world of Necromancers, Nature Witches and Stormbringers.
Ashlyn Drewek has once again shown why she is fast becoming an accomplished author. Every time she brings something new out I brace myself to be blown away and Malum Discordiae did not disappoint! I would 1000% recommend this!
Rating: 5 Stars
Malum Discordiae is currently available in e-book, hard cover and paperback and can be read as part of your Kindle Unlimited Subscription
4.5 stars 5 Stars Amy_TBS Dark Enemies to Lovers Jacquie KU mystery PNR SNik Standalone Trigger Warning