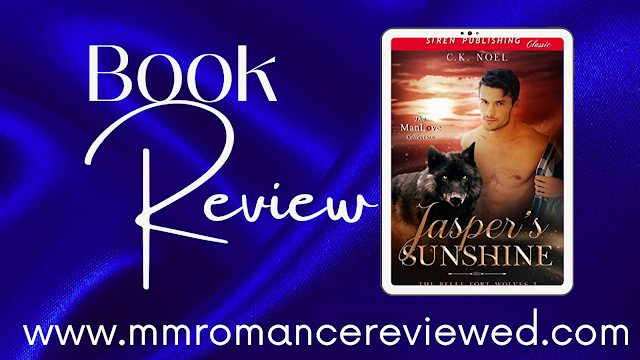 Jasper's Sunshine is the third book in the Belle Forte Wolves series and like the others you can read it as a stand-alone but it will make a lot more sense if you have read the previous books in the series. 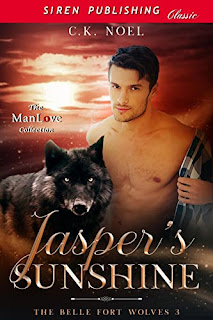 A playboy alpha wolf—A man struggling to survive. Fate pairs them together, but even a destined relationship takes work.
Wolf shifter Jasper Ellis isn't looking for love. He's happy slaking his lust with various lovers and wild flings until a routine traffic stop brings him face to face with his fated mate, Eric McCall.
Eric is struggling to stay afloat. He's sacrificed everything for his family. He doesn't have time for the sexy stubborn cop that pulled him over. He has more important things to worry about. Only one problem, he can't get Jasper out of his head. Deciding a walk will help clear his mind, Eric ventures out into the state forest—a decision that changes his life.
Jasper wants to woo his fated mate, but the universe keeps throwing everything at him, past lovers, human hunters, and even a stalker. He's got his work cut out for him, but he'll stop at nothing to claim his mate.
Red's Book Reads Review:
Some parts of Jasper's Sunshine seemed a lot more lighthearted to me and some bits, such as where Jaspers past came back to haunt him did make me giggle. I liked how caring Jasper was and how he was determined to look after Eric and his family as necessary.
There were a few things that I would have liked to see developed more but on the whole this was a short and enjoyable read.
Rating: 4 Stars
4 Stars Fated Mates Reds Book Reads Series Shifters Wolf