So excited to have T.A. Moore joining us today as part of her blog tour for Dirty Work, her lastest release and the first book in the Dirty Deeds series!

Thanks for letting me pop in to talk about my latest book, Dirty Work, which comes out on March 4. This is the first book in the Dirty Deeds trilogy and I had a lot of fun with it! It’s available online - https://books2read.com/Dirty-Work-Dirty-Deeds-Book-1 - and I hope you like it! I had a lot of fun writing it! 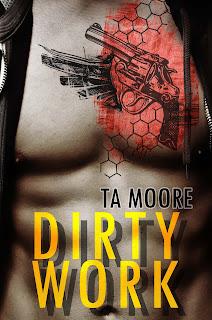 Crime Scene Cleaner [kraɪm siːnˈkliːnə] - Cleans up crime scenes…before the cops know there is one.

People always say ‘you can’t go home again’. It turns out that doesn’t count as a guarantee…especially not during a global pandemic.

After the jobs in LA started to dry up, crime scene cleaner Grade Pulaski was forced to pack up and move home. He loves his family, but the last thing he ever wanted was to face the ghosts he’d left back in Sweeny, Kentucky.

He certainly isn’t going to stay any longer than necessary. The plan is to save up enough money to move back to LA and give his business a kick-start. The problem is that, as previously mentioned, Sweeny’s a hole and the locals are anything but professional.

Now a body has gone missing, Grade’s reputation is being held hostage, and people keep asking whether his Dad really did run off with 100 grand of meth in the back of Dodge. Plus, even though you shouldn’t sleep with your employers, crime lord Clay Traynor is exactly the sort of bad idea that Grade can’t resist. Tattooed, bad news, and dangerous.

…oh, yeah. Grade’s job is to clean up the crime scene before the cops know someone’s dead. That’s why he needs to sort this out before he gets a bad review on dark net Yelp.

I also hope you enjoy ‘Clean Hands’ a short story prequel to the series.

Grade slid his earphones into his ears and flicked the podcast on. The host’s smooth, practiced voice picked up where he’d left off--mid-sentence, in the middle of the police botch up--and drowned out the creepy silence of the otherwise empty building.

“It’s hard work,” the boss had said when she hired Grade. “But it’s honest work.”

That had been the first lie.

The second part of it anyhow, anyhow. The first was fair enough, there was a lot of heavy lifting involved.

Grade picked up the body’s arm by the hand and rubbed the damp, lightly performed flannel along her arm from wrist to armpit. Her skin was cold from the fridge and sort of woody from rigor. As the hot water warmed her through it softened, dimpled under Grade’s fingers. It made it easier to straighten her out.

April Kenshaw. Twenty eight years old. She’d died from blunt force trauma. Grade made it a habit to work out how the corpses had died: murder, cancer, misadventure, just being too old not to. It was a bit morbid, but it passed the time. He’d gotten pretty good at it, but he’d not needed to be in this case. The front of April’s head was caved in a deep, triangular divot over her left eye. It was a pretty obvious cause of death.

He finished the bath and carried the bowl over to the sink to pour it out. The water swirled ominously around the sink and he had to turn the tap on full to blast it away. It was going to clog up again soon enough, but that was only Grade’s problem if he was on shift.

The water finally drained and Grade went back over to the body. He toed off the brakes on the gurney wheels and gave it a good shove to get it going. There hadn’t been much of April when she was alive, but right now she was evidence of where the sayings about ‘dead weight’ came from.

He positioned the corpse in front of the embalming machine. Technically the next part should be done by a licensed professional, not an eighteen year old drop out who’d been given a one-time tutorial when he started. That was life though, and apparently death too.

Grade lifted April’s arm up over her head to expose her armpit, freshly shaved as if she’d expected to be going somewhere other than the morgue. He lifted a scalpel off the tray and sliced neatly through the razor-burned skin. There was no blood as he poked around for the artery, his lower lip folded between his teeth as he worked.

It wasn’t like anyone had ever called Grade squeamish, but the first time he’d done this it had bothered him a bit. Not anymore. It really didn’t take long to get used to something.

Artery raised, it was time to inject the formaldehyde.

By the time Grade was finished April looked…a more acceptable sort of dead. Tomorrow one of the morticians would be in to spackle over the injury to her head and do her make-up.

One corpse down. Grade checked the ‘client’ list and grimaced. Three to go.


“Maybe we could get coffee,” Ben--who studied French and took the same bus as Grade every night--suggested tentatively. He blushed all the way to his temples. “I mean, you know, if that’s something you’re into?”

Grade hesitated as he wondered if he was or not. Ben wasn’t his usual type, but who’s to say his type couldn’t be different in LA? Everything else was.

Before he had to decide his phone went off. Grade grimaced an apology at Ben, mouthed ‘another time’, and edged away to take the call. He expected it to be Dory’s name on the screen as caller, but it wasn’t. Something in Grade’s chest eased a little when he saw his house-mate’s name instead even as his stomach sank.

So far that was the only bad thing about leaving Sweeny. The weird dissonance between missing your family and being scared they were calling because something had happened.

He swiped to answer the phone.

He could hear someone crying in the background and the ragged, wet breathing of whoever had called. Neither of them answered him. Grade was just about to give up and hang up when the caller sucked in a noisy breath and spat out his name.

It wasn’t Harrison, who was supposedly the one on the lease although none of them had ever seen it, but one of the other housemates. Shannon, The one who’d got Grade the job at the funeral home.

That meant it was probably Harry in the background, wailing now.

Nothing for a second as Shannon breathed raggedly in and out a couple of times.

TA Moore is a Northern Irish writer of romantic suspense, urban fantasy, and contemporary romance novels. A childhood in a rural, seaside town fostered in her a suspicious nature, a love of mystery, and a streak of black humour a mile wide. As her grandmother always said, ‘she’d laugh at a bad thing that one’, mind you, that was the pot calling the kettle black. TA Moore studied History, Irish mythology, English at University, mostly because she has always loved a good story. She has worked as a journalist, a finance manager, and in the arts sectors before she finally gave in to a lifelong desire to write.

Coffee, Doc Marten boots, and good friends are the essential things in life. Spiders, mayo, and heels are to be avoided.