From hardship to thriving in the Better Together Universe!  And now you can get all three audiobooks in one amazing set! 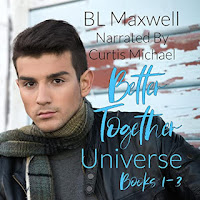 Book One: Better Together

Since being thrown out of his home by his parents, Caden has been struggling to survive on the streets.
He lives in constant fear, stresses over his next meal, and dreads trying to find a safe place to sleep at night. He eventually finds an unlocked car and settles in to sleep, but is soon interrupted when someone steals the car. With little choice but to ride along, Caden soon learns that first impressions aren’t always correct.
Seventeen-year-old Damario has been raising his little brother and sister by himself since his parents were deported. He never knew how hard it was going to be paying the bills and making sure there was always food on the table. Or how hard it would be to hold his family together when they all depended on him to do it. He finds himself stealing cars to make ends meet, but he never expected to find someone sleeping in the back of one of them. And he really didn’t expect this stowaway to change his life.
When Damario brings Caden home, it was supposed to be just for a shower and a hot meal, but he can hardly kick him out onto the streets again. There is no way he could have seen that by saving Caden that night, he was also saving himself. When Damario’s world starts to fall apart, they both realize that the answer to all of their problems is helping each other, and although the world tries to drive them apart, they really are better together.

Book Two: Chains Required
Rio and Caden have been together for a few years now. It’s a rare weekend they get to spend alone. When Rio suggests they get away to Tahoe for the weekend a few weeks before Christmas, Caden is too excited to even think of saying no. They start their trip, and even though they think they’ve planned for every emergency, they can’t control what Mother Nature has in store for them. When the car in front of them spins out into the newly fallen snow, they stop to help and soon find out that Caden’s not as alone in this world as he had originally thought. A few more planned surprises make for a special weekend for these hardworking guys who really deserve a weekend getaway.
Can be listened to as a stand-alone.

Book Three: The First Twelve
Rio and Caden met under harsh circumstances when they were both teenagers trying to survive on their own. Together, they raised Rio’s brother and sister, and have created a great life for them all, filled with lots of love and warmth. But just one thing is missing.
Together they’ve made a family for themselves, and now they have a chance to add one more - a child of their own. When Caden’s sister offers to be their surrogate, they’re overjoyed. Now, if they can navigate nine months of pregnancy hormones, morning sickness, and mood swings, everything will be easy. Until one little newborn arrives and keeps them busier than they ever imagined possible. Nine months seemed tough, but the first 12 will be even more challenging.
Just like every other challenge they’ve faced, they’ll do it together, and they’ll do it with love.

Laora's Review:
Better Together Universe is such a tender and softly written bundle it follows which consists of three books: 'Better together', 'Chains required' and 'The first twelve'. There is great character development of the main and side characters.
Caden and Damario/ Rio through their life from 17 years old through to their, I think late twenties/ early thirties. In that time frame they grow and develop as individuals, parental figures, husbands, and actual parents.
They meet in the most unlikely of ways when Rio steals an abandoned car in which Caden has sought refuge after being dumped on the street by his parents. Rio came to steal the car to earn extra money (beside going to school and having an evening job) to support his brother, sister and himself after his parents were deported to Mexico, due to an administrative fault. They together with the support of their neighbour, and re-found family create a family of sorts and learn to thrive.
The narrator is new to me and did a good job on the one hand he is very clear, understandable and characters are distinctly different from one another. On the other hand is his voice 'flatter' or should I say more monotone than I personally prefer.

Better Together Universe is available as part of your Audible subscription. Try Audible Premium Plus and Get Up to Two Free Audiobooks
4.5 stars Audio Code provided Contemporary Found Family Laora Series