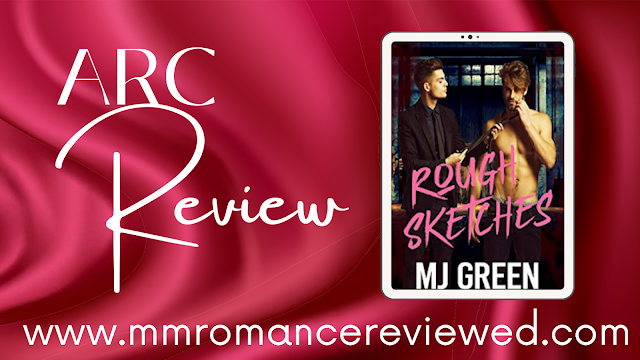 Lucas is a cop, sent undercover to infiltrate the notorious Tomasi crime family. Ryland is a member of the Tomasi family and the frequent target of undercover operations. As a straight man, Lucas is set on befriending Ryland however when they meet, all those plans go out the window.

From the Rough Sketches blurb: 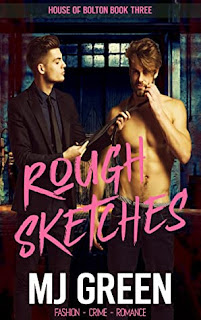 An undercover cop in over his head.

A future consigliere who falls hard.

Lucas's undercover assignment had seemed easy. Go undercover in the Tomasi Family and expose their latest money laundering scheme. Even possibly having to pose as a gay man didnt faze him, it wasnt like he'd actually need to sleep his way into the family... just catch a high-ranked members attention and string him along for a little bit. Easy, right?

He'd never been so wrong.

Lucas had never intended to catch the eye of Ryland Beltrame, a man rumoured to be the next consigliere for the Tomasi Family.

Never intended to find himself in the man's bed, or that he'd go there willingly... beg for it.
Never imagined how dangerous this assignment could get.

And he never imagined loving someone - a man - with so much blood on their hands. Blood that could easily be Lucas's

Rough Sketches is a 56k a fluffy dark, high angst, mafia romance novel set in Melbourne, Australia and involves a caring Daddy Dom falling for the one man he shouldn't. Each book in the House of Bolton series can be read standalone

I really enjoyed Rough Sketches. Having not read the rest of the series I would absolutely say this can be read as a stand-alone.
I loved how Lucas’ conflicting ideals were shown throughout the book as he struggled with not only discovering his sexuality but also with falling for a criminal who stood for everything he opposed. There were parts of this book that were so emotional as well which I wasn’t expecting but I loved how deeply Ryland feel for Lucas and how much he was willing to put on the line for him. Rough Sketches really surprised me but I absolutely loved it!

Rating: 5 Stars
Lesetiger's Review:
Both the author and the series were new to me, but I think Rough Sketches can be read well as a standalone.
I didn't have any great expectations, I was just curious because the blurb totally appealed to me.
The author's writing style is light and easy, so I was able to dive into the story very quickly.
The story itself surprised me - in a positive sense. I was captivated from the beginning and could not put the book down, which is why I read it in one go. It was entertaining, exciting and emotional.
The characters were drawn deeply and I liked the contrasting main protagonists incredibly well. On the one hand, there is Lucas, the Undercocver agent who is tasked with investigating the Tomasi family and uncovering their latest scheme. On the opposite side is Ryland, whose goal is to make every undercover agent disappear forever.
But how does Ryland handle falling in love with a cop? It wasn't meant to be, so trouble is inevitable. Lucas finds out that he's probably not as straight as he thought. And he has a submissive side that harmonizes perfectly with Ryland's dominance. And now he's struggling with his budding feelings for a man he shouldn't be falling in love with. The development of their relationship was great described and you could understand the feelings, even if they were contradictory.
I will keep an eye on this author as this was certainly not my last book by MJ Green. Rough Sketches is highly recommended, I loved it!
Rating: 5 Stars
5 Stars angst ARC Contemporary cop crime family Daddy Dark dom Fluffy Lesetiger Mafia Reds Book Reads Series Standalone undercover