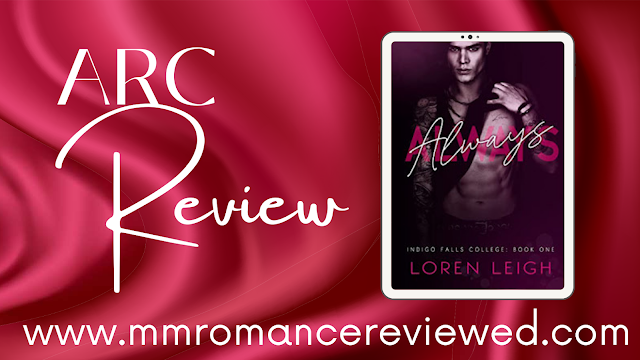 "You're as bright as starlight for me. Brighter." Always, Loren Leigh

First crush, first love, first always. A debut of a series that delivers all the romance and swoon.
From the blurb: 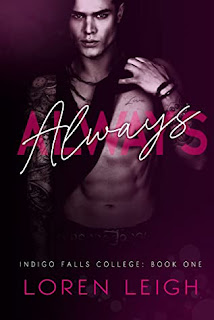 I avoid him.
Every time Kepler Quinn steps into a room, I get the hell out.

He does . . . something to me. When those discerning gray eyes flick towards me, his brow rising in a silent greeting, there’s a tightening of my abs. A zapping hum quivering low along my spine.
There are about a million reasons it shouldn’t be what the little voice in the back of my head insists . . . a crush.
Because Kepler isn’t just some random guy. He’s my brother’s best friend. He’s also my TA for physics this semester. And also . . . a guy. I’ve never held strongly onto being straight, but I’ve also never had this sun-scorching need for another guy before.
But I can’t avoid him when we’re suddenly in the back stacks of the library—alone—nothing but the smell of old books and softly falling dust around us. And instead of walking away from him, I let out the two words that burn in my throat:
“Kiss me."
Always is a swoony M/M college romance with a bisexual awakening and sizzling chemistry. It’s the first in the Indigo Falls College series, a standalone, and features a happy ending.

Wow !! I'm summing this book up as a passionate and emotional read. Jae-Jin is trying to get through college while trying to work through his ..... reactions to his brothers best friend... and his TA for labs. On top of this, trying to mend his dysfunctional family. Lots of angst and anxiety, addictions.... along with his slow realisations about his feelings, which are soo very cute. I mean, you can see what's it about but just reading how he reacts and what he decides....it's just adorable. Love the Korean additions...especially "simkung".... beautiful ! And that declaration of love - wow...stunning !! Absolutely enjoyed this book.
Rating: 5 Stars


SNik's Review:
First in series (Indigo Falls). Brother’s best friend. Single POV. Jae-Jin has always felt something for his brother’s best friend Kepler, always kept his distance, always avoided him so that something didn’t grow, but when Kepler ends up as Jin’s TA and starts to insert himself into Jin’s life there is no running from the strong attraction. The descriptions of the pining, the yearning, the overwhelming emotions Jin has for Kepler are beautiful. This is the author’s debut?! How is that possible? Both Jin and Kepler are likable, honest, intelligent, caring, supportive, romantic and every interaction is full of swoon, in addition to some very steamy scenes. Sometimes a story that has a dreamlike quality in bringing two characters together, that have possibly been in love since they first met and are meant to be together, really brings the sense of romance and HEA. This book delivers on that and really worked for me as a reader. Great start to a series, can’t wait for more.
Rating: 5 Stars
Red's Book Reads Review:
I have to say I really enjoyed this book and didn’t want to put it down. Jae-Jin is in his final year at college and is straight. Kepler is his brothers best friend and a man yet Jae-Jin can’t deny he tries to avoid being in the same room as him because of the strange way he makes him feel. When he finds out Kepler is his TA, he can no longer avoid him and has to address these feelings that seem suspiciously like a crush.
I adored this book! I loved Jae-Jin and how determined he was to help his family. Kepler is just amazing with his determination to pursue the relationship with Jae-Jin and not to shy away from him just because of the risks.
I really fell for these characters and I can’t wait to see what happens with the others mentioned, especially Jae-Jin’s brother. A really wonderful book.
Rating: 5 Stars
Amy_tbs' Review:
Stirring, emotive and outstanding. The chemistry is Sizzling.
Jae-jin a college student struggling the dynamics of his dysfunctional family, college, his ever-present anxiety and there's to top it off! The mere mention of his brothers best friend Keppler Quinn, also TA for Physics this semester.
Keppler Quinn, with his discerning gray eyes flicking towards Jae-Jin, his brow rising in a silent greeting. Well, hell he stirs lascivious feelings deep within him.
If only Keppler wasn't straight! But that doesn't stop two words falling from Jae-jin mouth, when they're unexpectedly alone together...... Two words “kiss me”
This Bi-awakening Romance was a delight to read and is #1 in Indigo Falls College series with a HEA ending. It can be read as a Standalone.
I could gush over this book all day. I would recommend it if you love College romances with lots of angst, heartfelt scenes and incredible characters with some quirks. I can't wait to buy it for myself.
Rating 5 Stars
Jacqueleen's Review:

This one is my first by this author, but definitely not my last. I really enjoyed the romance between Kepler and Jin. There was so much longing on Jin's end and it was so sweet when he realized there had been on Kepler's end too. I was a little bummed the book was only in Jin's POV. I really would have loved some time in Kepler's head. He was so mysterious for much of the book. The man hid his emotions well, but I loved coming to learn what his subtle fascial expressions meant right along with Jin. When the time came and Kepler finally opened up about all he was feeling for Jin, it was truly lovely. The man has a way with words when he deems ready to speak them.

"You've been my constant. For longer than you can possible guess. You're as bright as starlight for me."

My heart broke for Jin and his family situation. Having a family member myself who suffers from addiction I can relate to all the feelings he goes through. I can also relate to his brother Shin as well. Addiction touches all, not just those who are suffering from it. I was glad Jin had Kepler to be there for him when the weight was too heavy for him to bear. Their romance was such a delight to read when the book had to move on from heavier topics. The side characters were also extremely likable. Dex, Jins roommate and bestie, was my favorite. I sincerely hope that he gets his own book in this series because I will definitely be keeping an eye out for when the next Indigo Falls book comes out.
Rating: 4 Stars
Always is is currently available in e-book and paperback and can be read as part of your Kindle Unlimited Subscription
4 Stars 5 Stars Amy_TBS ARC bi awakening Brother's Best Friend College Contemporary HEA Jacqueleen KU Miki J Reds Book Reads SNik Standalone steamy