The Magic Between by Stephanie Hoyt 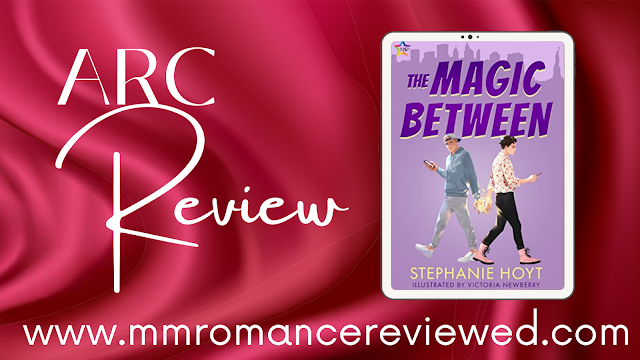 "...has a date. A real, honest-to-god date with someone he likes, and he’s absolutely out of his mind with nerves about it." 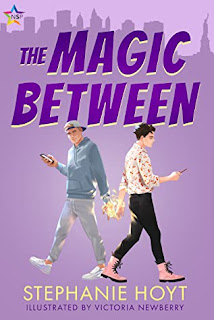 The official release of The Magic Between includes an updated prologue not found in advanced copies. *The reviewersreceived an arc so will have read a different prologue*

In a world where everyone has magic coursing through them, legend says magic itself craves a mate. Legend says those with opposite magics have the greatest chance of forming the unbreakable Bond it desires.

A.B. Cerise is an obsessive-compulsive pop star with the ability to turn invisible. He’s an out bisexual with absolutely no belief in Bonds. He has a love-bruised heart, thinks dating in the spotlight is a hassle at best and a nightmare at worst, and has no intention of going through it all over again.

Matthew Hellman-Levoie is the NHL’s number one goalie prospect, the youngest in a hockey dynasty, and one of the rare few who can see the unseeable. He’s a straight man who wears his heart on his sleeve, has grown up searching for a Bond, and dreams of finding the love of his life.

Their magic is magnetic. Their touch is electric. They’re the textbook case for Bonding. But legend never said anything about what to do when sparks fly between people opposite in more ways than magic.

Totally loved The Magic Between!! There’s a lot of information at the beginning in relation to the background/world building but once you’ve passed that and get into the story, it’s beautiful.
It’s in a modern setting where people with magic is totally normal. We have 2 guys that meet – one with anxiety issues, which affects his ability and the other who believes utterly in something that no-one does. Then it’s more about them getting to know each other and what happens when friendship turns to attraction and quite possibly more.
There’s bi/first awakenings, hurt/comfort, jock/artist, family/made family, homophobia, ….
The dialogue between the characters just flowed naturally – there’s so much content but the story didn’t lag or get bogged down. Very well written – it’s sweet and funny and romantic and loving and just adorable. The magic is just a bonus – I simply loved how the author was able to describe the magic….all those colours and feelings, blew me away.
Definitely need this one on your bookshelf !!
Rating: 5 Stars
Sheena's Review:

This was a new author to me, I was drawn to The Magic Between by the blurb. I like the idea of magic in the contemporary world so add in a little romance and I'm usually sold. I liked the idea of the story, but just wasn't sold on the execution of it. I was hoping the leads had more they would do with their magic but it's almost incidental to the story, they have magic and that's it.
I understand the prologue will be updated for publication and that might clear up a few of my niggles. The whole thing is is more about Matthew's bisexual awakening and whether he wants to, or should come out. There's also the side issue of AB displaying his magic in public, something he's been terrified of and goes to therapy for. It's a whole big slow burn with lots of back and forth between Matthew and AB, that's not a criticism but there is a lot of back and forth. It's really more a story of coming out, coming to terms with OCD and the magic is incidental which is a shame.
I did struggle at times with the magic aspect in the book but on the whole I enjoyed it. I received an ARC and this is my honest review.
Rating: 4 Stars

Now that you've read the reviews, you can check out an excerpt, learn more about the author and enter a giveaway by visiting the release blitz post!