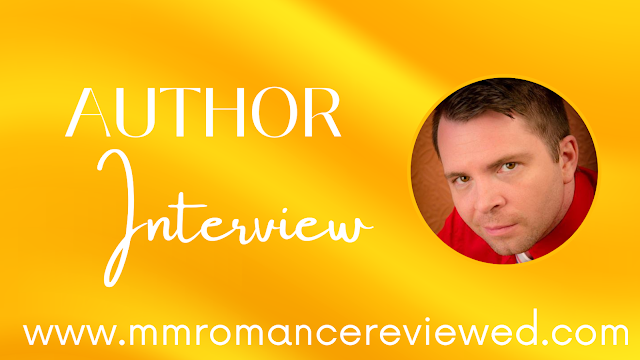 We had the pleasure of being part a release blitz for one of Rob Browatzke's recent books, Finishing Last, and now we get a chance to learn even more about him:
Indie or Traditionally published? - Tell us how this works for you...

I’m mostly indie. I had two traditionally published and wasn’t particularly happy with the work the publisher did. Was it nice having someone else take care of edits and layout and cover? Yes. Did they promote? No.

I love that there is such possibility now for indie publishing that hundreds of people whose stories would never get told can now be read.

Oh, I am not organized. I have vague ideas, but that’s it. Like, these are the guys and this is the conflict, but who they are and how they overcome that? I find out as I write.

A Fluid State is my first romance.

Patrick, a straight dad, is surprised to find his son, only 11, has started to dress like a girl (Patrick’s words, not mine). More, his kid is hanging out with drag queens! Trying to understand his son, Patrick befriends one of the queens, Ann Moore, aka Andrew. While Andrew does help Patrick understand, he also brings out feelings Patrick never knew he had. Perhaps sexuality, like gender, is something fluid after all!

Set in the same world as A Fluid State, my latest release is called Finishing Last.

Mitch meets Dan, and they do NOT hook up. Instead, they become friends and soon are dating other people. Still, there’s something between them, and as the friendship deepens, everyone seems to notice… except them. (No cheating, don’t worry! These are nice guys, and you know, nice guys finish last)

Part-time. Bills gotta be paid, and so I  have a muggle job running a nightclub, which provides endless inspiration for all sorts of gay drama.

There’s a few ways this can go. There’s always some people who’ve passed I’d love to spend more time with, but today, I think, we’ll go with Betty White, Charisma Carpenter, Christine Baranski, and Marcia Cross. And we are serving TRUTH.

They all pay visits. I have six books now set in the same universe, so some of these characters have been with me for coming on ten years. Even though they’re mostly stand-alone, I love it when an old character pops by on the page for a visit. They all want to make sure I know they’re still there, ready to be revisited whenever inspiration strikes.

Sometimes that works out for them. Kent, a nurse from “Last Call in Wonderland”, was only ever meant for the one scene. But he popped up again in A Fluid State, before getting his own story in “Starting Over” – and he’s been in everything since!

2022 will hopefully see two more books come out in my River City Romance series (which may finish the series aside from some novellas). But I’m also really itching to do some big gay fantasy novel, so who knows!

Mitch and Dan, in Finishing Last, have some great banter that I truly loved writing. I definitely wouldn’t say I’m a comic writer, but I do like injecting some sass and humour into all my characters. Mitch is definitely the sassiest though.

That’s my Kari. She’s got a whole shelf of ARCs and old editions, and is often the first one to read drafts.

What made you decide M/M romance was the genre you wanted to write?  Do you write other genres?
I’ve got ten books out right now, and romances are only 3 of them. Some are just gay fiction. One is like a young teen fantasy exploration. One is a biblical parody. I’ve been writing as long as I can remember, and romance, while often featured as part of the books, was never the focus. Still, that’s where my writing currently is. I think its along the lines of the saying “those who can’t do, teach.” Except in my case, it’s “those who don’t have romance, write it!” (This is only true of me, not saying it applies to anyone else!)
Where do you find inspiration?

Inspiration comes from: the gay crying on my shoulder after getting his heartbroken at the club; the hot stranger sitting three tables down from me at the coffee shop; that boy I kissed that one night outside the bar; the lyrics in that song I had on replay last month; the couple who posts their every picture perfect moment online…. I find it everywhere I can.