Teaser Tuesday: For All It's Worth by Jax Stuart 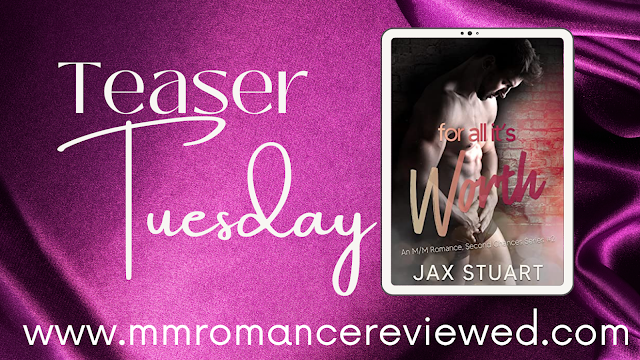 I don't know about you, but I've been waiting for For All It's Worth since Jax teased it in So Worth More back in September and then showed off this beautiful cover in October... and I currently have an ARC burning a hole in my kindle, but have to remember that it's not coming out for a few weeks and I am dedicated to reading the ARCs I have coming out sooner... I'll be satisfied with this little taste for now- and I hope you are too...  If you haven't read So Worth More yet, now is the perfect time to add it to your TBR so you're ready for For All It's Worth to come out on February 28th
From the blurb: 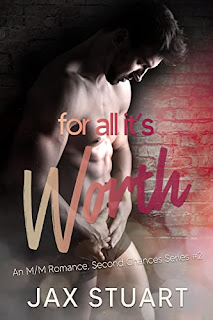 Charlie needs a second chance at life
Mugged, beaten, and left for dead. Charlie gets the wake-up call that he so desperately needed.
Rehab, a new path, and second chances. As Charlie works to reset his life.
Max has missed Charlie like a piece of himself was lost but hated the destructive path Charlie was on. He cut his best friend out of his life until Charlie changed his ways.
This new Charlie? This one, he wants to take a second chance on. To finally confess what's in his heart.
Friends to lovers, second chances, and family healing. For All It's Worth is the second book in the Second Chances series and features Will's brother Charlie and his best friend Max whom you met in So Worth More. This book can be read as a standalone but may be best enjoyed as part of the series and is told in dual pov.
Content warning for discussions about alcohol dependency and a brief violent scene. The couple also kiss someone outside of their relationship while the other partner is present
Excerpt:
Charlie
I was just placing the last dish into the dishwasher when Max came up behind me and encircled me with his arms. He pressed his cheek to my shoulder blade and sighed.
“I can’t get used to this. Being able to touch you like this.” Max ran his hands over my chest. “Fuck, Charlie,” his hand roamed over my abs, “you were always hot to me, but this is just…”
He held me a little tighter as his hands continued to wander. I loved the feel of him plastered against me.
Just under the curve of my ass, I could feel Max’s reaction to his exploration, as his cock thickened in his jeans. Unable to stand it, needing to touch him, I turned around, pulling him close to me so I could brush my lips against his.
What was going to be a tender touch sparked to a flame between us. Our movements quickly became frantic. Max pushed me against the counter as his tongue plundered my mouth, his hands moving to the hem of my shirt and pulling it up.
He flung my shirt away and kissed down my throat, along my collarbone, and down to a nipple. He laved at it as his slim fingers tweaked at the other.
I groaned at the sensation and yanked at his shirt, removing it to get at his creamy skin. My hands explored as he kissed and sucked along my chest. I just needed to be touching him.
It became too much and I needed his mouth like I needed air. Grasping at his hips, I pulled him close and took his mouth in a hard kiss.
The angle wasn’t right so I turned our positions and lifted him to perch on the counter.
He used his feet to pull me into the gap between his legs.
This was perfect, we fit together better this way and I groaned at the feeling of our bare chests touching.
I lost all sense of time as we made out in the dimly-lit kitchen. All I could feel was Max. The citrus smell of his skin, his hair like silk under my fingers. Pants and moans filled the space. The sense that all was right with the world as our lips continued to press together, his tongue delving into my mouth to meet mine. He groaned as I nipped his bottom lip and I swallowed the sound.
Awareness of how my dick ached had me pulling away a little. We needed to slow this down. I wasn’t going to ask Max for more.
Max made a noise of protest as I put some distance between us, his legs around my waist flexing as he tried to pull me back to him. He reached for the button of my jeans, quickly opening them and delving a hand in.
For All It's Worth releases February 28th and is currently available for pre-order.  So Worth More is available to read on kindle and Kindle Unlimted!
#TeaserTuesday