Review: Red: A Modern Shifter MPreg Fairytale: Fairest of Them All book 2 by Harper B. Cole, Thrisha Linde and Colbie Dunbar 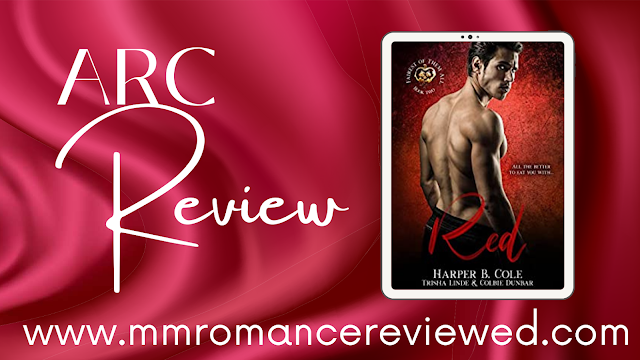 'I felt the circle of life closing in a full rotation. Birth, life, death.' - Oscar

From the Red Blurb:
All the better to eat you with...
Alpha Aran has always been the biggest of his brothers, the oldest, the most responsible, and therefore, he’s also the one tasked with running the family business, Gruff Construction. It only feels natural to take care of everyone in his life, even some distant relative he barely knows. Sure, he doesn’t mind bringing chicken soup to his foster mother’s estranged father in the middle of the woods… the woods filled with the sound of howling wolves… Nothing weird about that. What he isn’t expecting, though, is finding someone who wants to take care of him for a change.

Omega wolf shifter Oscar has been waiting to meet his match… or rather, his mate. No one in his old pack piqued his interest, and he thought a new pack might offer more enticing options. Except it’s just more of the same. His biological clock is ticking, and it doesn’t help that he’s become the de facto den father, surrounded by everyone else’s babies. For once, he wants to take care of someone he can call his own. However, no one is more surprised than he is when he stumbles on a mouth-watering human stranger in the forest, and he finds himself tempted to take a bite.

Harper B. Cole, Colbie Dunbar, and Trisha Linde bring you Red, the second book in the Fairest Of Them All series. The novel features an alpha who’s overcome enormous hurdles to build a successful career, an omega wolf shifter who is lonely even when surrounded by his pack, a newly formed pack that’s trying to preserve and conserve both their traditions and the environment, a chance meeting with instant chemistry, an unexpected pregnancy, and an HEA despite the odds. If you love stories where opposites attract and when both the alpha and omega are prepared to give everything up to find their happily ever after, grab your copy today.

Red was a fun, sweet quick read about Oscar and Aran. It is a fun take on Little Red Riding Hood  and book two in Fairest Of Them All series, but can easily be read standalone. Of course it has shifters. MPreg and a HEA which made it interesting.