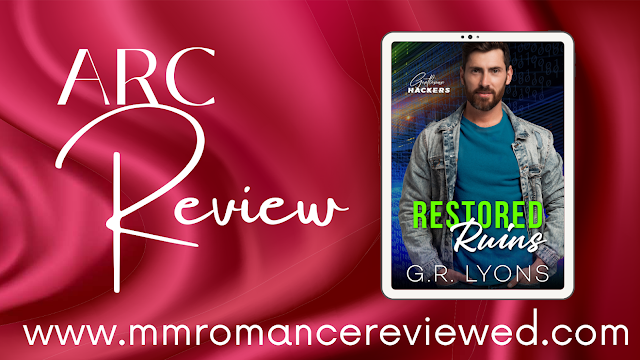 He was just as alone as all those ghosts wandering about outside, unseen by almost everyone around them. - Connor

Restored Ruins is a new series opener with a different vibe, in a good way... 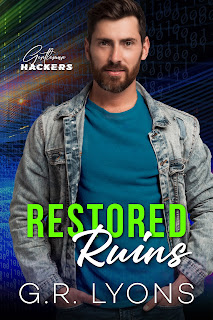 Kidnapped by his idol? Yes, please!
Connor Jenkins is sick of rejection. Now, instead of getting close to anyone, he lives vicariously through other people's phones and webcams. Thanks to his skills, he always gets away with it.
Until he hacks his idol.
Brendan Shyth is haunted by loss. First, the death of his boy. Then the end of his music career thanks to a grief-induced drunken accident. Fringe science regrew his fingers, but he still can't bring himself to play again. Avoiding his fans, the media, and his manager, Brendan hides in his mansion, determined to be left alone.
Until he finds his webcam on and realizes someone is watching him. Someone other than the ghost of his dead lover, that is.
Brendan has Connor tracked down and kidnapped, meaning to teach him a lesson. But the teasing brat gets under his skin in a way that no one has in years.
A boy in need of security. A ghost in need of acceptance. A man in need of faith. With a career, sanity, and hearts on the line, can these men overcome their fears before it's too late?
Restored Ruins is the first book in the Gentleman Hackers series. It features a boy whose hair color never stays the same, a daddy who puts him in serious time-out, a ghost desperate to be seen, and an MMM HEA ending. No pianos were harmed in the writing of this romance (though they do make good horizontal surfaces).

Restored Ruins is different to what I thought it would be, in a good way. It says paranormal but I got a more sci-fi vibe from it with the different (alien?) races and Connor's ability to change his appearance at will. The science that regrew Brendan's fingers was pretty cool.

I loved how cheeky both Connor and Frankie were and I could see their bond. I couldn't see one with Brendan because they barely had a conversation. Brendan spent a lot of time angry and storming about. We don't really get to see him as a daddy since he was grieving and I would have liked to understand him more.

A few steamy scenes that I enjoyed and it was pretty fast paced.

Connor was absolutely my favourite and I loved the tie in to the series.

I am a bit discombobulated after reading this book. I had to struggle to stick with it in some parts. I would class it as a sci fi book with a paranormal twist. I have a hard time rating it. For me it would be a 3.5 stars but if you love sci fi I can imagine you rate it higher.
Connor is lonely and hacks ( one of his hacks) cameras to see what people do in their day to day live. Brendan is a famous musician who disappeared from view three years ago and was Frankie his daddy. Frankie wa a potter/ artist and Brendan his boy.
The things I liked the originality of the book, for me as non sci fi reader. The mmm plotline,  age gap, an mc Connor who is trans, persons having the ability to change their molecules around. The interactions with Frankie and Connor. Connor facilitating Brendan and Frankie to reconnect
I did not like the explicit scenes with a ghost lover being Frankie. Brendan wallowing al the time: he seems immature for a daddy type. Connor just going along with being kidnapped alright he is a fan, but no.
They all find their hea/ hfn.
I was kindle provide with an arc.
Rating 3.5 Stars
If you'd like more information about Restored Ruins - we're a stop on the release blitz tour and you can check out an excerpt from the book in this post
3.5 stars 4 Stars Daddy Ghost Jacquie Laora MMM PNR Sci-Fi