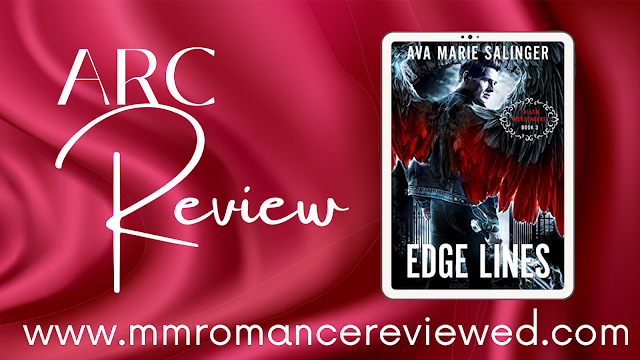 We welcome a new reviewer to the MMRR team today and she dove right in and shared a review of Edge Lines by Ava Marie Salinger with us!  Edge Lines is the third book in the Fallen Messengers Series and should be read after Fractured Souls and Spellbound.
From the blurb: 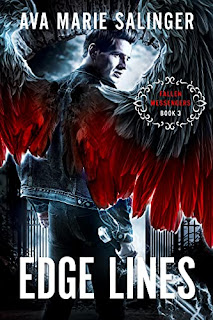 The Gods have come to San Francisco…
Cassius Black and Morgan King’s trip to Ivory Peaks to uncover clues about their past takes an unexpected turn when a rift materializes and war demons attack the capital. Having saved one world by the skin of their teeth, they return to Earth, only to find it has been rocked by ominous quakes bearing a close resemblance to the phenomenon that nearly destroyed the Dryad kingdom.
After defeating demons that emerge from a crevasse in San Francisco, Cassius and Morgan rescue the Wild God Pan from the bottom of a rift with the help of Victor Sloan and the city’s otherwordly. But instead of thanking them, Pan makes a startling demand: rescue his lover and prevent the Spirit Realm from being destroyed, and he will reveal the truth about who Cassius and Morgan are.
Help comes from an unexpected source when a pair of Reapers visit the city and Cassius, Morgan, and Victor soon go hunting for a missing deity who may hold the key to saving all the realms. Can they free the immortals from their prisons and find the powerful artefact that can bend the mind and will of even a God? Or will the enemy who has long manipulated them from the shadows win this war and destroy everything they have come to care for?
Edge Lines is the third novel in the gay urban fantasy romance series Fallen Messengers. If you like your paranormal adventures full of action, magic, snark, and a host of steamy angels and demons, then you’re not going to want to miss this enthralling, fun-filled ride!

Now that's what I'm talking about!! Edge Lines goes back to what we all LOVED about book one.

The major plot line is focused on Morgan and Cassius. The romance portion was great. Loved seeing Morgan all jealous of Victor. My heart went out to Victor though, and it was definitely a treat to get a few chapters in his head.

There is MAJOR plot movement as the fallen angels get closer to finding out what happened all those years ago during the Fall. That's all I'm gonna say about it cuz you should enjoy gobbling up the new info as much as I did. The pieces are falling into place. I'm on the edge of my seat waiting for whatever adventure Cassius and Morgan go on next.

Oh. And after reading, I think I have a good idea who's going to be playing a big role in Oathbreaker (book 4). 😜

Edge Lines is available in paperback, hardcover and Kindle E-book form, and can be read for free as part of your Kindle Unlimited Subscription!