An Angel's Song by A. C. Everett 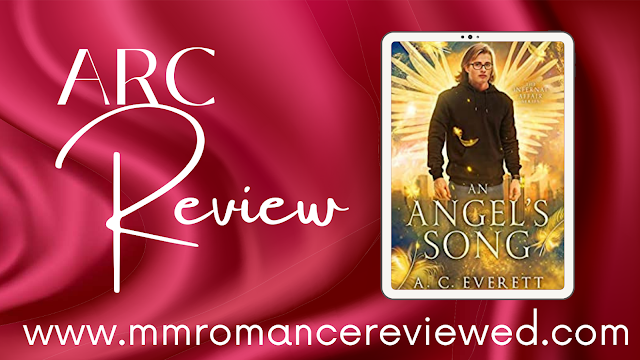 A bar fight leads Aiden into a whole world he never knew existed, a world of magic, Angel’s and demon’s, a world where he learns that his friends are more than they seem.
From the An Angel's Song blurb: 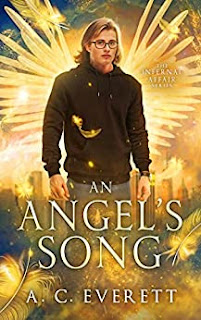 There is nothing remarkable about the life of Aiden Lucas until a handsome stranger falls into his lap, turning his mundane life upside down and thrusting him into a fantastical world lurking just beneath the surface.
Casper Tenebris has officially hit rock bottom, waking in a gutter with no memory of who he is or how he got there. A chance encounter with Aiden triggers a chain of events that lead him to discover secrets best forgotten.
Together, Aiden and Caspar must race to uncover the mysteries of Caspar’s missing memories before all Hell breaks loose. Literally. Their attraction for each other is undeniable, but their chemistry could be the catalyst that ignites a war between Heaven and Hell. Will knowing the answer push them together or tear them apart?
AN ANGEL’S SONG is a slow-burn paranormal romance packed with snarky characters, apocalyptic prophecies, angels, demons, and enough heat to melt your kindle.
Book #1 of the Infernal Affair Series

An Angel's Song was not what I was expecting at all but I enjoyed it. I got a little irritated with Aiden at times and I’m not sure on the chemistry between Aiden and Caspar as it didn’t quite build for me.

Be warned though, this book does end in a cliffhanger and I need to know more about Aiden and his powers. I am also hoping that the chemistry builds more between Aiden and Casper. This is a good book and there is definitely a lot of potential for the rest of the series.